The latest US employment report will rock financial markets at 12:30 GMT Friday. With the Fed actively trying to weaken the labor market, the stakes are very high. However, it seems like Powell won’t get his wish yet, as most indicators point to another solid jobs report. That could inflict more damage on stocks and supercharge the roaring dollar.

Federal Reserve officials have embarked on a crusade to vanquish inflation, raising interest rates at an astonishing pace in order to cool the labor market and demand in the economy. Chairman Powell has been adamant that this process requires a period of economic pain, which is a necessary evil since letting inflation run rampant would be even more painful in the long run.

Investors have finally absorbed this message. Market pricing currently suggests interest rates will be raised to 4.4% by early next year, and will be held there for some time. Speculation for rate cuts has almost vanished, as policymakers insist they will hold their nerve until inflation has truly been slain. 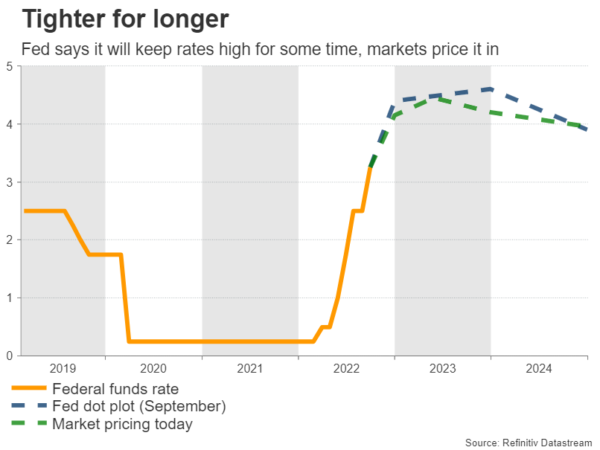 The ‘problem’ is that the labor market is still booming. Employment opportunities remain plentiful, previously discouraged workers are returning to the labor force, and there’s no sign of any widespread job losses yet. As long as this is the case, the Fed will be forced to keep its foot heavy on the rate increase pedal.

Turning to the upcoming data, economists expect nonfarm payrolls to have risen by 250k in September, less than the 315k previously but still a healthy number overall. The unemployment rate is seen unchanged at 3.7%, while earnings growth is anticipated to have lost some steam in yearly terms. 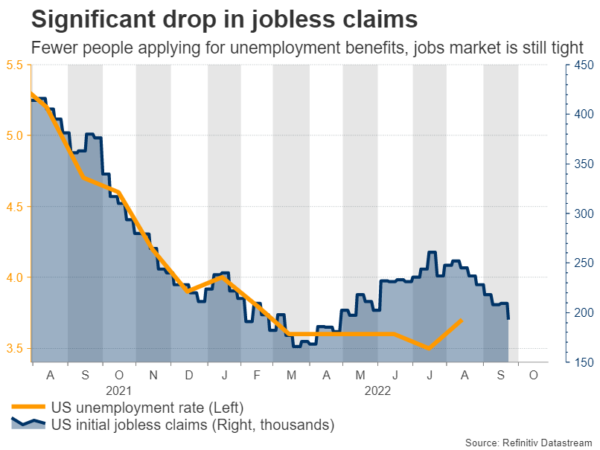 As for any surprises, the indicators that have been released so far point to another strong report. The number of people applying for unemployment benefits kept falling during the entire month, signaling that fewer workers got laid off. Meanwhile, business surveys pointed to a further increase in employment levels, albeit at a softer pace than the previous month.

This will be the final round of employment data before the next Fed meeting in early November, so it will be crucial in shaping expectations. Market pricing is currently leaning towards a fourth 75 basis points rate increase in a row, assigning a 63% probability for such action. A solid jobs report could push that percentage even higher, adding fuel to the US dollar’s rally.

From a technical perspective, further declines in euro/dollar could encounter an initial cluster of support around the 0.9560 region, marked by the recent lows.

On the flipside, a surprisingly soft report might send euro/dollar higher, with a break above 0.9860 turning the focus towards the 1.0120 zone.

Investors will receive more clues about the employment data on Wednesday, when the ADP jobs report and the ISM services PMI are released.

In the big picture, it’s still too early to call for any trend reversal in the dollar. The reserve currency has gone on a rampage this entire year, capitalizing on a perfect storm of widening interest rate differentials, safe-haven flows, and an absence of any attractive alternatives. These dynamics haven’t changed. 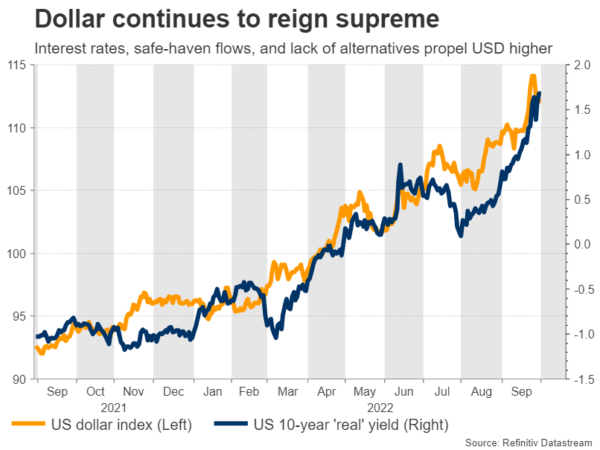 The Fed continues to outgun other central banks on interest rates, as foreign economies are grappling with even greater threats. European business surveys imply a recession is imminent as the energy crisis ripples across the economy, the British pound has been decimated by the government’s irresponsible budget plans, the Bank of Japan has left the yen for dead, and China’s property sector is imploding.

Until something begins to change on the global scene, it’s difficult to imagine the dollar losing its crown.