The Dollar Index has risen since last Tuesday, adding 2.5% to lows at 105.16. Speculators paused selling off the US currency in response to data and comments from Fed officials implying a higher interest rate target.

The dollar’s pullback could also be described as a market breather, implying a pause after a rather aggressive decline of almost 7% from November 4th to 15th. 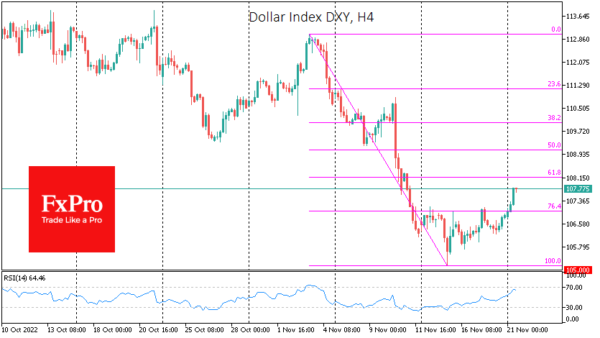 Despite this rebound, major investment houses call the dollar generally overvalued and point out that now could be a good time for a trend reversal. We have discussed this before, noting both fundamental shifts (other central banks have caught up with the Fed in rate hikes, and the latter is signalling a rate cut) and historical patterns (the dollar’s response to global reversals cycles in monetary policy last about a year). 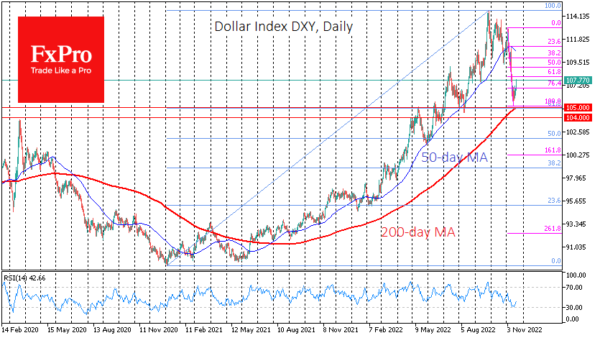 Nevertheless, from a short-term perspective, traders are better to be prepared that the DXY could rise to 108 or even 109 from the current 107.7 before we see the start of a new leg down.

The dollar has been selling off at an elevated pace since November 4th. A consolidation below the 50-day MA is considered an essential first signal for breaking the trend. Interestingly, this line has quickly reversed from an uptrend to a downtrend, indicating that the overall tendency has changed.

The next and more reliable signal on the technical analysis side should be an anchoring below the 200-day MA, which the USD bulls effectively defended last week. Apart from that crucial curve, which the big market-makers use for trend-following purposes, the 61.8% retracement level of the DXY from the lows of January 2021 to the highs of late September passes around 105.

The most conservative technical approach suggests that the current DXY drawdown is a correction after the 20-month rise, followed by a new wave of growth. Nevertheless, the FX dynamics of DM currencies are just an example where we can say that trees don’t grow to the sky. The rule of mean reversal works here unless something breaks globally in the economy. The only such global breakdown would be the insolvency of Japan or another major country or the eurozone’s breakup. So far, while there is no such threat on the horizon, the end of the dollar 20-month uptrend is the main scenario.

If we are right, the dollar bears are taking profits and gaining liquidity before a new wave of a sell-off in the DXY, which might start this week or next week from levels between 108 and 109 and push it back below 100 before the end of the year.