Spanish capital markets are breathing a sigh of relief; while the EUR (€1.1842) trades within striking distance of its two-week high this morning as European markets took relief from Catalonia stopping short of declaring immediate independence from Madrid yesterday.

Catalonia’s leader Carles Puigdemont resisted a formal declaration of independence Tuesday, instead indicated that the want away region sought to hold official talks with the Spanish government over their future.

Spanish PM Rajoy will convene an extraordinary meeting of his cabinet in Madrid today to discuss his next move.

Stateside, investors will parse today’s FOMC minutes (02:00 pm EDT) for further confirmation that a December rate increase is on track. U.S ten-year Treasury yields are trading a tad lower after President Trump indicated yesterday that he plans to make changes to his tax plan within the next few weeks.

The market is also concerned that the President’s ongoing public spat with Senator Corker could stymie a potential tax overhaul.

1. Global stocks in the black

Japan’s Nikkei share index closed at its highest in 21-years overnight, with gains mainly led by defensive shares, though exporters benefitted from solid global growth. The Nikkei rose +0.3%, while the broader Topix rallied +0.1%, its highest finish in a decade.

Down-under, Aussie stocks rallied further after a Tuesday pause ended a solid two-day rebound, with the S&P/ASX 200 up +0.6%. Tech’s also continued to boost South Korea’s stock market, with the Kospi up +0.7% to near its record, set in July.

In Hong Kong, stocks fell, pressured by a sharp reversal in property shares after the city’s chief executive Carrie Lam unveiled a mix of housing and tax relief policies that disappointed the market. The Hang Seng index fell -0.4%, while the China Enterprises Index lost -0.1%.

In Europe, regional indices trade little changed across the board with the exception of the Spanish Ibex, which trades sharply higher after the Catalonia president suspended results of the independence referendum for several weeks. 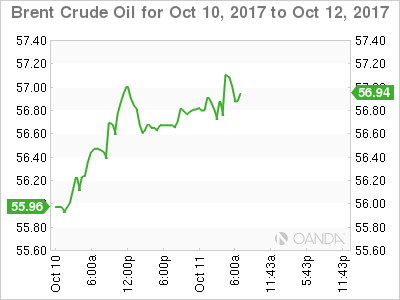 2. Oil rises on signs of a tighter market, gold unchanged

Ahead of the U.S open, oil prices are a tad better bid, rising for a third consecutive day on signs that markets are gradually tightening after years of oversupply, although the outlook for 2018 remained less certain.

Expect investors to look to the U.S’s fuel inventory data today and tomorrow for indicators on price direction.

Note: Both reports are delayed a day due to Monday’s U.S federal holiday.

The OPEC-led production cuts started in January and are set to expire at the end of March 2018. Prices are supported as OPEC said oil markets were “rebalancing fast” after years of oversupply.

Note: Discussions to extend the pact are taking place, but production elsewhere is rising.

Gold prices trade relatively stable ahead of the U.S open as the ‘big’ dollar held steady, with investors waiting for Fed minutes for clues on the outlook for potential rate rises. Spot gold is unchanged at +$1,287.36 an ounce. 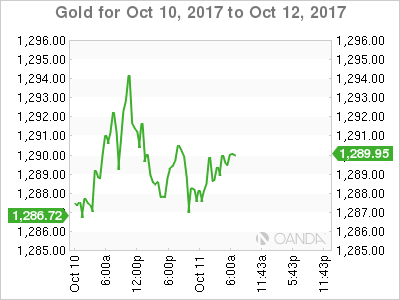 The remainder of this week is expected to be rather eventful for fixed income traders.

Today stateside, the auctions of three-year and 10-year Treasury notes are both scheduled, while a sale of 30-year Treasury bonds is slated for tomorrow. Dealers will want to make room for product and are expected to cheapen up the curve to take down product.

This afternoon, the Fed will release minutes from its September meeting. The market will scour the report for potential clues on future interest rates – currently, fed fund futures are pricing in a +90% odds for a December rate hike.

On Friday there is U.S retail sales and inflation data, the consumer-price index, to keep fixed income traders busy mapping the future of U.S yields. 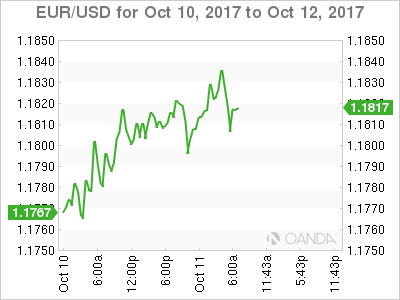 4. Euro waits for a catalyst

The EUR’s (€1.1810) gains are limited, even as it rises to two-week highs outright (€1.1845) and against the CHF (€1.1531) after Catalan President Puigdemont suspended a declaration of independence yesterday afternoon. The market is waiting for Spanish Prime Minister Rajoy’s response to the crisis (a press conference is timed for 06:00 am EDT) and is key for providing direction for ‘single’ unit.

The ‘mighty’ USD is also under pressure amid ongoing uncertainty over who will be the next Fed chair. Fed Governor Jerome Powell is now in the running and is regarded as more ‘hawkish’ than incumbent Janet Yellen, whose term expires in February. If anointed, many believe that he probably would not look to unwind stimulus as aggressively as some of the other candidates on the short list. 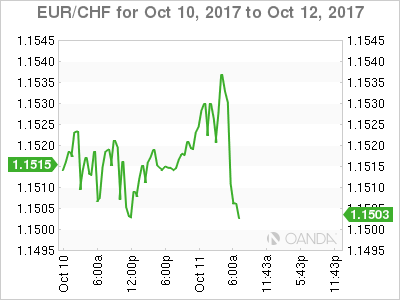 Hong Kong’s new Chief Executive Carrie Lam gave an upbeat view on the city’s economy during her inaugural policy speech last night, by stating that 2017 GDP is likely to grow faster than the +3.5%, the midpoint of the government’s raised August forecast and above the +2.9% annual average of the past decade. 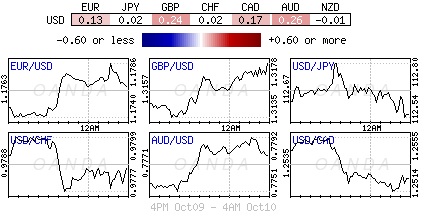