The Euro starts the week on the back foot as the market waits for the next big development in Spain, where Catalan separatists are expected to deliver a response after PM Rajoy moved on the weekend to impose federal authority on the region.

In Japan, the PM Abe’s Liberal Democratic Party won big as expected, they retained two-thirds majority in Sunday’s general election. Abe’s win makes the reappointment of Kuroda, and hence the continuation of ultra-easy monetary policy, significantly more likely. Yesterday’s victory sent the Nikkei to the longest winning streak on record and the yen to a new three month low outright.

Elsewhere, a number of central bank policy meetings begin this week – Bank of Canada (Oct 25) and European Central Bank (Oct 26). The BoC is expected to pause in its interest rate increases this time around. The bank will also publish its Monetary Policy Report (MPR), while the ECB is expected to announce a recalibration of its asset purchase program.

Also keeping investors busy will be the potential unveiling of President Trump’s pick for Fed chair and his efforts to overhaul U.S’s tax code. Later in the week, Q3 preliminary GDP data for the U.K and U.S also will be released.

In Japan, Abe’s convincing election victory lifted the Nikkei to its highest in 21-years and world stocks to an all-time high overnight, despite an escalation of Spain’s constitutional crisis. The Nikkei ended up +1.1%, while the broader Topix climbed +0.8%. Expect the market’s attention to now shift to corporate earnings.

In China, stocks inch a tad higher, with consumer and healthcare firms lending the biggest support in the session. The blue-chip CSI300 index rose +0.1%, while the Shanghai Composite Index also added +0.1%.

Note: Quarterly earnings from a slew of Chinese companies this week will serve as a barometer of the country’s economic health.

In Europe, regional indices trade mostly higher across the board with the exception of the Spanish Ibex, which trades lower on continuing worries over Catalonia as Spanish Banks weigh on the index. 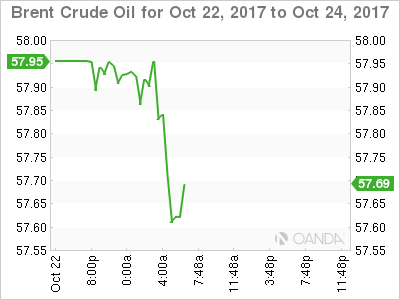 Oil prices remain better bid over supply concerns in the Middle East and as the U.S market shows further signs of tightening while demand in Asia keeps rising.

Data on Friday showed that the amount of U.S oilrigs drilling for new production fell by seven to 736 in the week to Oct. 20, the lowest level since June according to Baker Hughes.

In the Middle East, flows from Iraq has reduced due to fighting between government forces and Kurdish groups, and production still being withheld as part of a pact between OPEC and non-OPEC producers to tighten the market.

In Asia, growth remains strong especially in China and India, the world’s number one and three importers.

Gold hit its lowest in over two-weeks this morning, as the dollar climbed to a three-month high versus the yen (¥114.05) after Sunday’s election results have left the door open to ultra-loose monetary policy for longer. Spot gold was down -0.4% at +$1,275.81 an ounce. 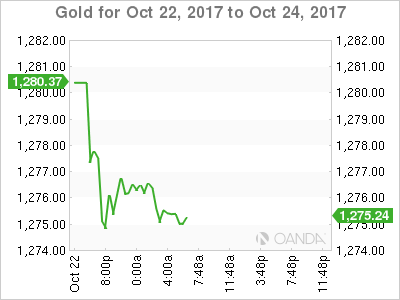 Eurozone borrowing costs have eased a tad as Abe’s big win gives the green light for a continuation of Japan’s hyper-easy monetary policy.

JGB yield’s erased an early rise as Abe’s election win reinforced the markets view that his reflation economic policies will remain in place. The yield on the 10-year JGB initially rose to +0.080%, matching a 10-week high, but slipped back to +0.070% or unchanged.

All eyes will now shift to the ECB meet Thursday (07:45 am EDT) when officials are expected to signal baby steps away from their ultra-easy monetary policy stance. Germany’s 10-year Bund yields fell -2 bps to +0.43%, pulling back from a one-week high at +0.46%.

With the Fed expected to hike one more time in 2017 continues to support the ‘big’ dollar. The yield on U.S 10-year Treasuries has declined less than -1 bps to +2.38%. 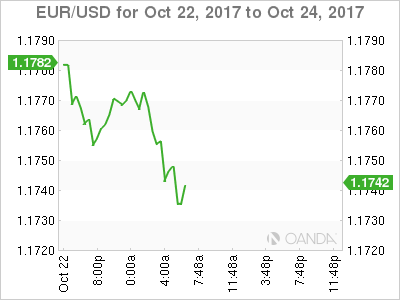 A wider spread between U.S. and eurozone bond yields, as well as political uncertainty in Spain, is weighing on the EUR (€1.1744) outright. U.S yields are being supported by market expectations of U.S tax cuts and the possibility of a new Fed chair that may be more of a ‘hawk.’

The EUR is expected to trade defensively ahead of Thursday’s ECB meeting. Central bank officials are expected to outline their asset purchase reduction plan. Market guesstimates expect the ECB to begin to taper its current €60B monthly asset purchases in January 2018 with consecutive €10B monthly reductions. This means the ECB would cease balance sheet expansion by the end of Q2 2018.

The downside risk for EUR is for the ECB to announce that it will taper with lower bond purchases for longer. 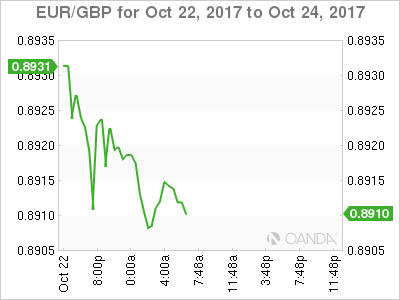 5. Catalan parliament to meet on Thursday

Earlier this morning, Catalonia’s parliament indicated that it would hold a complete session on Thursday morning, in which it will lay out its response to Madrid after PM Rajoy government, said it would impose direct rule.

Carles Puigdemont party is expected to launch a legal appeal against the application of article 155, which rests power from the regional government and lays the groundwork for new elections.

The Spanish senate is expected to pass article 155 this Friday 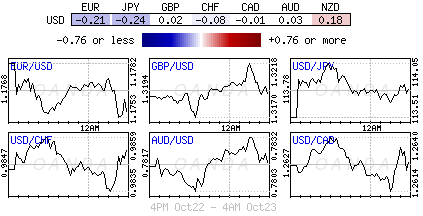