FOREX: The pound hit a one-month high at $1.3463 in the wake of better than expected retail sales in November. However, it soon slipped back to 1.3420 after the BOE held rates steady but signaled that GDP growth in Q4 “might be slightly softer than in Q3”. The euro rebounded to $1.1830 finding support from upbeat preliminary manufacturing PMI readings for the month of December, while versus the pound it inched up to 0.8812. The dollar continued ranging near yesterday’s lows against its major peers, while it reached intra-day highs versus the swissie at 0.9892 (+0.23%) after the SNB maintained its loose monetary policy to mitigate risks arising from an appreciated currency. The aussie consolidated gains from upbeat employment data above 0.76 key level (+0.37%) and the kiwi stretched lower to (-0.34%).

STOCKS: European stocks were in the red with tech shares being the worst performers, while bank stocks also retreated after yesterday’s not-so-hawkish comments by the Fed Chair. The benchmark STOXX 600 was down by 0.35% at 1100 GMT, the German DAX 30 fell by 0.40% and the French CAC 40 declined by 0.47%. The British FTSE 100 slipped by 0.25%.

COMMODITIES: Oil prices tumbled after the International Energy Agency raised its US output growth forecasts for 2018, fueling concerns from rising US supply. WTI crude declined by 0.25% to $56.40 per barrel and Brent fell by 0.43% to $62.17. Gold was flat near one-week highs at $1,255.70 per ounce. 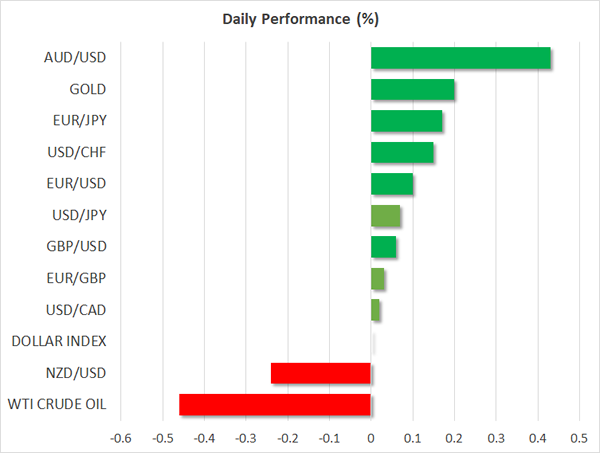 Day ahead: ECB policy decision pending; US data in focus

Looking forward, the European Central Bank is anticipated to keep its main refinancing rate unchanged at 0.0% (1245 GMT) respectively. However, as this is widely expected, the focus will turn on future economic projections. ECB policymakers are expected to revise up growth forecasts and give the initial estimates for 2020. The outlook for inflation however, would be of greater importance to determine the path of future interest rates given that inflation in the Eurozone has stuck below the ECB’s goal.

On the data front, US retail sales due at 1330 GMT are forecast to rise moderately by 0.1 percentage points to 0.3% m/m in November. Meanwhile, the US labour department is also expected to report a soft increase in initial jobless claims, with analysts projecting the number of people claiming unemployment benefits to rise by 3,000 to 239,000 in the week ending December 8.

Then at 1445 GMT, IHS Markit will publish its preliminary readings on the US manufacturing and services PMI for the month of December. Both indices are said to show some improvement.

Elsewhere, the Bank of Canada’s chief Stephen Poloz will give a speech at the Canadian Club of Toronto at 1740 GMT. A press conference will follow. 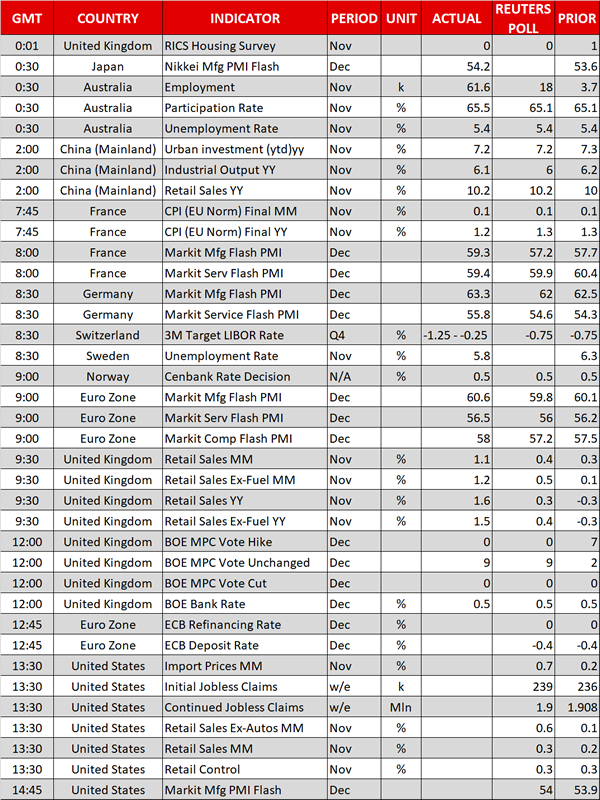