FOREX: The dollar traded slightly higher versus a basket of currencies and further above a two-week low hit earlier in the week. Despite this, it was still on track to record a weekly loss. The euro was down, though it recovered to a significant extent earlier losses after the results from Catalonia’s regional elections showed a victory for pro-independence forces. 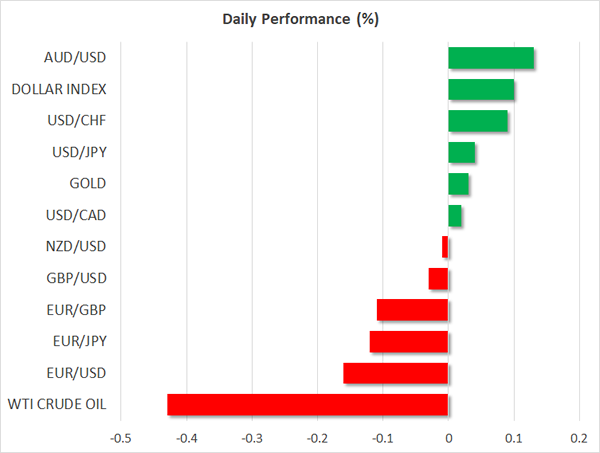 The dollar index, which gauges the greenback against the currencies of six major US trading partners, was 0.1% up at 93.37, as we’re getting closer to Christmas and thin trading is anticipated. This compares to Wednesday’s two-week low of 93.16.

The US Senate yesterday averted a government shutdown yet again by voting in favor of a bill that provides funding to the government up to January 19.

Dollar/yen was not much changed, trading at 113.37, not far below its highest in 10 days reached yesterday. The pair was supported by rising long-term US yields throughout the week – the 10-year Treasury yield yesterday touched a nine-month high of 2.50% – and a BoJ that seemed in no hurry to tighten monetary policy as it completed its meeting on monetary policy yesterday. Pound/dollar was also not much changed at 1.3377.

Separatist forces winning the majority of seats in the Catalan parliament exerted pressure on the euro, pushing euro/dollar as low as 1.1815. Eurozone’s common currency later recovered though to trade 0.2% down versus the dollar at 1.1854. The pair is well on track for a weekly gain, having advanced earlier in the week on the back of rising German yields.

Dollar/loonie was roughly flat at 1.2738 after retreating by 0.7% in the day that preceded and recording a more than 2-week low of 1.2696. The Canadian dollar was boosted by the positive surprise in inflation and retail sales data, with higher oil prices over the last number weeks also to some extent lending support to the currency.

The aussie was 0.1% higher versus the US currency at 0.7711, just a shade below the one-and-a-half-month high tracked earlier in the day. The Australian currency was supported by a rise in iron prices. Kiwi/dollar was flat at 0.7015, also trading close to multi-week high levels. 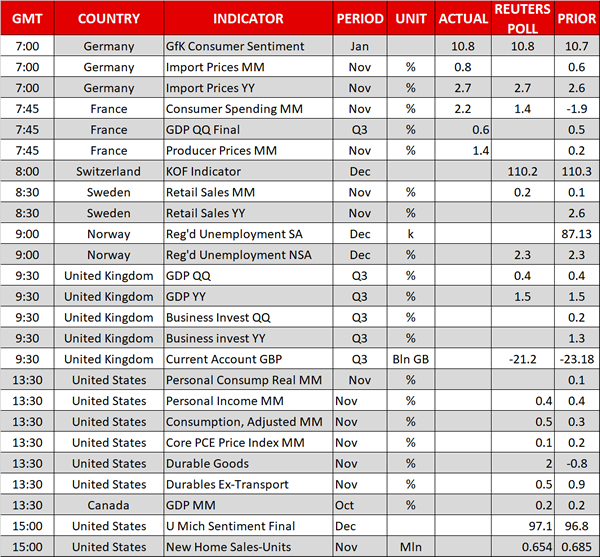 Friday will see the release of some economic reports though it is expected to be a quiet day for traders, with UK markets being only partially open ahead of the Christmas holiday.

The UK is delivering final figures on GDP growth for the third quarter at 0930 GMT, with analysts projecting the economy to expand in line with second estimates by 1.5% y/y and 0.4% q/q. The pound, though, is likely to have a muted reaction to the data as traders are more eager to hear what the projections for the fourth quarter would be.

Canada will also get monthly stats on GDP growth for the month of October at 1330 GMT. As final numbers are only provided by Statistics Canada, the loonie might experience some volatility in the wake of the numbers.

Elsewhere, the Bureau of Economic analysis will report on the core PCE index, the Fed’s preferred inflation measure, at 1330 GMT. Expectations are for the index to inch up by 0.1 percentage points to 1.5% y/y in November, but the dollar might not react much given that the Fed has already signaled that further rate hikes are on the way despite subdued inflation. Moreover, the US tax puzzle is almost complete, and markets seem confident in the performance of the US economy.

Readings on US personal spending and personal income as well as on durable goods orders, new home sales and the University of Michigan’s consumer sentiment survey are also due today.

Turning to Eurozone, the focus will be in Catalonia, where the pro-independence parties succeeded to gain the majority in a regional vote on Thursday, bringing a headache to the Spanish government. Recall that the Spanish Prime Minister, Mariano Rajoy, called the polls in October after he took control of the region and prevented a declaration of independence. Now, secessionists parties have enough seats to reassemble the parliament and potentially agree on a new coalition. 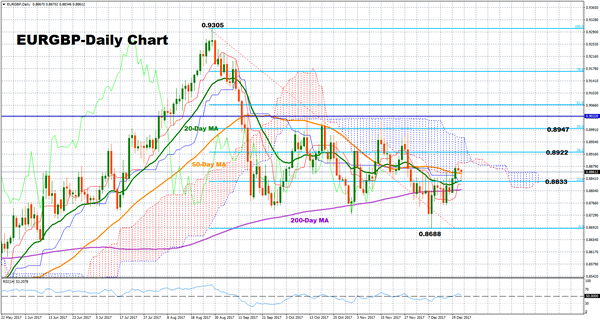 EURGBP climbed back to the 0.88 key area after it found support at the six-month low of 0.8688. In the near-term, the picture is looking neutral as the RSI is moving sideways close to the 50 neutral-perceived level and the shorter-term moving average lines have flattened out.

An immediate support to downside movements might appear at the 23.6% Fibonacci at 0.8833 of the downleg from 0.9305 to 0.8688, while further declines from here would meet first the 50-day moving average at 0.8800 and then the bottom of the aforementioned Fibonacci retracement at 0.8688.

Should the pair head up, resistance could be found at the 38.2% Fibonacci level at 0.8922 before prices target strong resistance at the 50% Fibonacci at 0.8947, which has been repeatedly tested in the past.