Germany’s preliminary inflation data for March are due for release on Thursday, at 1200 GMT. Forecasts point to an acceleration in price pressures for Eurozone’s largest economy, which would undoubtedly be pleasant news for the European Central Bank (ECB) as it prepares the ground for an unwinding of stimulus that is likely to take place later this year.

After touching a high-point of 2.0% in yearly terms back in February 2017, Eurozone’s inflation rate has been steadily trending lower in the past year, lending credibility to the ECB’s view that “a high degree of monetary accommodation is still needed” for inflation to sustainably return to its target. Despite this shortfall though, the Bank has remained firm in signaling that an exit from its QE stimulus program is drawing closer. Assuming inflation does not plummet over the next months and barring some other unforeseen negative shock, the ECB looks set to gradually phase out its asset purchases from September onwards, with some signaling of this likely to come at the summer meetings. 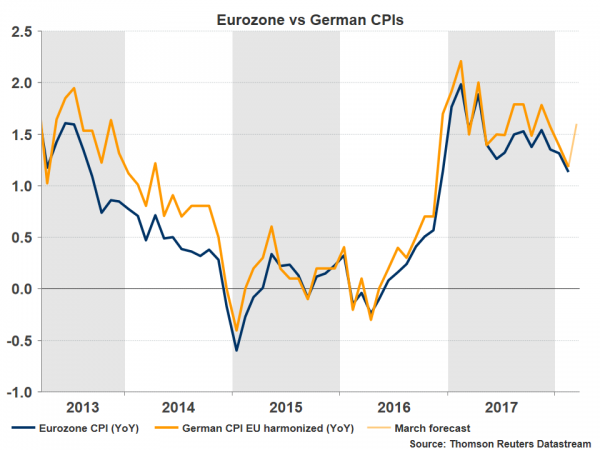 A potential acceleration in Germany’s inflation, and by extent in the entire bloc’s, would fit nicely into this narrative. In March, Germany’s preliminary EU-harmonized CPI rate is projected to have risen to 1.6% in yearly terms, from 1.2% previously. The forecast is supported by the nation’s preliminary Markit Composite PMI, which noted that March saw a further strong increase in average prices charged for goods and services. Even though the rate of inflation softened to a three-month low, it still remained higher than any other point since 2011, the survey said.

In case Germany’s CPI rate comes in stronger than expected, euro pairs could rally on speculation for a similar surprise in Eurozone’s CPI rate, which will be released on April 4 due to the Easter holidays. Euro/dollar could encounter immediate resistance near the 1.2475 zone, marked by the highs of March 27, with further bullish extensions likely to aim for 1.2555, which is the pair’s recent top from February and also a three-year high.

On the other hand, a disappointment in these data – for instance a smaller-than-anticipated rise in the CPI rate – could weigh on the common currency. Euro/dollar may edge lower and retest the 1.2370 support level, identified by the bottoms of March 27, with a potential downside break of that area bringing in play the 1.2235 hurdle, defined by the March 20 low.

As always, Germany’s regional CPI data will be released a few hours ahead of the nationwide print, so any market reaction may occur even before the official release time. It’s also worth noting that the French and Italian CPI prints that will be released on March 30 will also be closely monitored, as investors gauge the bloc’s overall reading – France and Italy being Eurozone’s second and third largest economies. Spanish figures have already been released and were somewhat disappointing, with the CPI rate rising by less than expected.