The US Dollar advanced against a basket of major currencies, after data revealed a sharp upward revision to US GDP growth in the fourth quarter of 2017.

The third estimate of the US annualised gross domestic product (GDP) was revised higher to 2.9% on a quarterly basis in the final three months of 2017, boosted by robust jobs growth and healthy consumer spending, while the preliminary print had recorded a rise of 2.5%. The nation’s GDP had risen 3.2% in the prior quarter.

Additionally, pending home sales in the US rebounded 3.1% on a monthly basis in February, rising for the first time in 3 months and exceeding market consensus for a gain of 2.0%. In the previous month, pending home sales had dropped by a revised 5.0%. On the other hand, the nation’s advance goods trade deficit slightly widened to $75.4 billion in February, from a revised deficit of $75.3 billion reported in the prior month, while investors had envisaged it to narrow to $74.4 billion.

In other economic news, the MBA mortgage applications in the US grew 4.8% in the week ended 23 March, compared to a fall of 1.1% in the prior week.

Trading trend in the Euro today is expected to be determined by the release of Germany’s unemployment rate and flash consumer price inflation data, both for March, due to release in a few hours. Later in the day, the US initial jobless claims, followed by personal income and spending data for February as well as the final Michigan consumer sentiment index for March, will garner a lot of market attention. 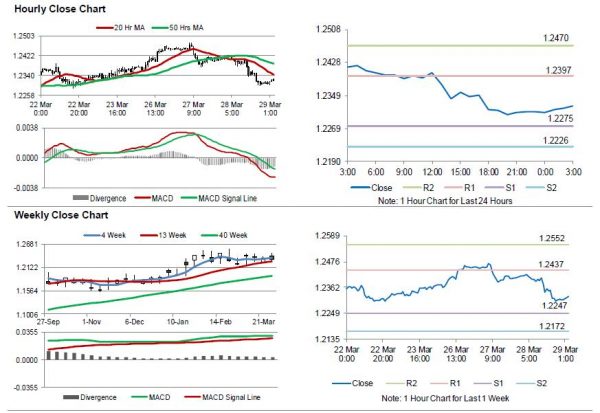