Dollar Treads Water Ahead Of US Inflation Data

FOREX: The US dollar traded higher against a basket of currencies yesterday, with dollar/yen surging 170 pips in a single day, though its rally is starting to lose steam again in the European session (-0.19%). Today, dollar traders are likely to turn their attention back to the economic calendar and the core PCE index for February. Euro and sterling were sold-off against the US dollar for the second day in a row. Euro/dollar was trading marginally lower by 0.03% during today’s European session, while pound/dollar moved down by 0.06% and retested its opening price again. Antipodean currencies were mixed, with aussie/dollar up at 0.7667 (+0.10%), but kiwi/dollar down at 0.7195 (-0.21%). Dollar/loonie was last seen at 1.2912 (-0.07%).

STOCK: European stocks moved higher after the sharp losses in technology companies yesterday. The pan-European STOXX 600 and the blue-chip Euro STOXX 50 were up by 0.47% and 0.74% respectively. The German DAX 30 rose by 0.74%, the French CAC 40 gained 0.60%, the Italian FTSE MIB traded higher by 0.49% and the UK’s FTSE 100 climbed by 0.37%. Asian equities closed higher, while futures tracking the US indices were pointing to a positive open after two consecutive red days.

COMMODITIES: In energy markets, West Texas Intermediate (WTI) crude oil and London-based Brent crude oil were mixed. WTI was up by 0.11% at $69.45 per barrel, while Brent was down by 0.29% at $69.33. Moreover, copper jumped above the $3.00 level, rising by 0.27%. Gold held steady on Thursday (-0.03%), a day after posting its biggest one-day fall in the last 9 months, as tensions over North Korea and trade eased, while the US dollar gained. 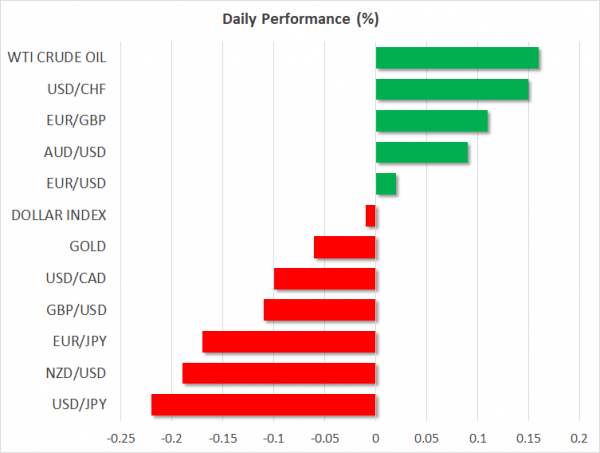 Day ahead: US and German inflation prints in the limelight, Canadian GDP also eyed

The most significant data release will be the US core Personal Consumption Expenditure (PCE) index for February, the Fed’s favorite inflation measure. It will be released alongside personal income and spending figures for the same month, at 1230 GMT. The forecast is for the core PCE rate to tick up to 1.6% in yearly terms, from 1.5% previously. Meanwhile, both income and spending are projected to have risen at the same pace as in the previous month, at 0.4% m/m and 0.2% m/m respectively.

Regarding potential surprises, note that out of the 39 institutions submitting their forecasts to the Thomson Reuters system, 22 anticipate the core PCE rate to rise to 1.6%, while 16 of them see the rate remaining at 1.5%. Only one expects a pick-up to 1.7%. Thus, the risk appears to be a lower-than-expected reading, as opposed to a higher one like 1.7%. As for spending and income, one is a little cautious to trust the forecasts for unchanged rates considering that retail sales fell for a third straight month in February, pointing to a slowdown in spending, while average hourly earnings slowed. The probability for a Fed rate hike in June is currently 74% and in case these data disappoint, that number could decline, causing the dollar to give back some of its latest gains. Conversely, strong prints could add fresh fuel to the greenback’s recovery.

US initial jobless claims for the week ended March 23, and the Chicago PMI for March are also due out.

At the same time as the US figures, Canada will release its GDP data for January. Economic growth is expected to have held steady at 0.1% month-on-month. While this print could trigger some volatility in the loonie, especially in case of a deviation from expectations, the currency’s broader direction is likely to be dictated primarily by NAFTA updates.

Half an hour ahead of the US and Canadian data, at 1200 GMT, Germany will release its preliminary CPI figures for March. Expectations are for the nation’s EU-harmonized inflation rate to rise to 1.6% in yearly terms, from 1.2% prior. Germany’s regional CPI prints have already been released, and they support the forecast for an increase in the nationwide rate.

In energy markets, the Baker Hughes oil rig count at 1700 GMT will provide a fresh indication of whether US crude production continues to soar.

As for the speakers, Philadelphia Fed President Patrick Harker (non-voter) will deliver remarks at 1700 GMT. 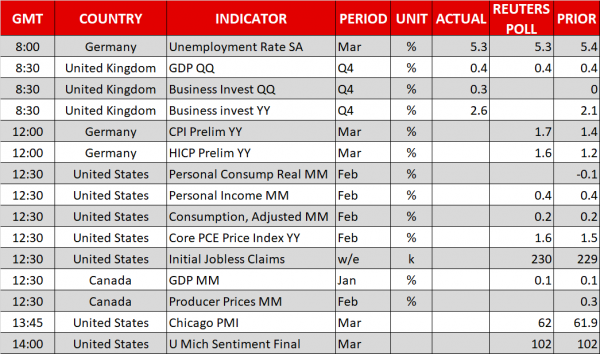