FOREX: The US dollar index was nearly 0.3% higher on Wednesday, touching its highest level in four-and-a-half months, and extending the significant gains it posted on Tuesday on the back of a rebound in longer-term US Treasury yields and particularly strong JOLTS data.

STOCKS: Major US indices closed practically flat on Tuesday, in the aftermath of the US decision to leave the Iran nuclear deal. The Nasdaq Composite and the Dow Jones managed to climb 0.02% and 0.01% respectively, while the S&P 500 fell by 0.03%, as gains in energy shares and defense contractor stocks were offset by losses in the utility sector. As for today, futures tracking the S&P, Dow, and Nasdaq 100 are currently very close to neutral territory as well. In Asia, Japan’s Nikkei 225 and the Topix fell by 0.44% and 0.39% correspondingly, while in Hong Kong, the Hang Seng rose 0.18%. In Europe, futures tracking the major benchmarks are mostly in the green, pointing to a higher open today, with the only exception being France’s CAC 40.

COMMODITIES: Oil prices soared on Wednesday, amid speculation that the US reinstating sanctions on Iran would curb the nation’s crude exports. WTI and Brent crude surged by 2.7% and 2.8% respectively, both reaching fresh highs last seen in 2014, following a very turbulent ride on Tuesday (see below). In precious metals, gold prices plunged despite a marked increase in geopolitical uncertainties, namely in the Middle East. The yellow metal is down 0.6% and is currently trading near the $1,306/ounce mark, as the sharp rebound in the US currency is weighing on demand for the dollar-denominated metal. Should the greenback continue to move higher, then gold could well test its 2018 lows soon, near $1,301. 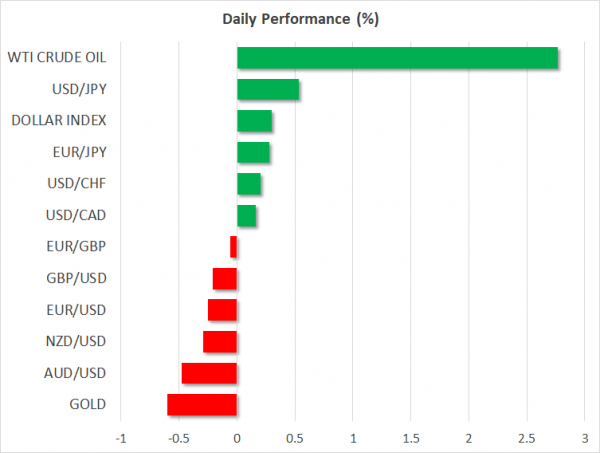 Dollar strength and heightened volatility in oil prices were the two main themes in financial markets on Tuesday. The US dollar index touched fresh highs last seen in late December, as market participants awaited the decision of the US President on whether his nation would pull out of the Iran nuclear deal. Euro/dollar and sterling/dollar continued their freefall, with the former breaking below 1.1850 and the latter briefly falling through 1.3500.

As for oil, price movements can be best described as a rollercoaster ride. WTI prices dipped by roughly $2.5 ahead of Trump’s announcement, after headlines suggested the President would delay the withdrawal. But prices rebounded sharply once he started talking and announced that the US will leave the nuclear deal with Iran, and re-impose fresh sanctions on the oil-exporting nation.

Trump said the US is committed to preventing Iran from acquiring nuclear weapons and that it will work with its allies to ensure that outcome. Importantly though, he also kept the door open for negotiating a new deal, displaying a similar method of approach to his handling of the steel and aluminum tariffs, where he imposed the levies but quickly postponed them and called for negotiations.

Oil rebounded in the aftermath of Trump’s remarks on expectations for reduced Iranian supply, and got another kick higher from a surprising drawdown in the weekly API crude inventory data. In the big picture, it is still unclear what impact the US decision will have on oil markets. While the US is due to impose new sanctions as it attempts to broker a new deal with Iran, the other nations in the accord (UK, France, Germany, Russia, China) have not displayed the same intentions. If these nations, as well as Iran itself, choose to remain in the deal, then a unilateral withdrawal from the US is likely to be much less impactful, particularly so because the US does not import oil from Iran. 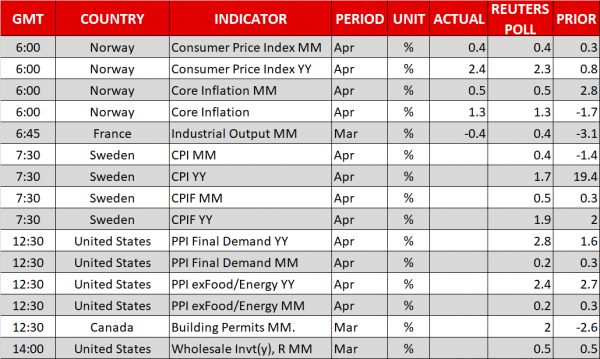 Day ahead: US PPI due; geopolitics at the forefront

US factory price inflation as gauged by the producer price index is one of the releases attracting interest out of today’s calendar. However, geopolitical developments after the Trump administration’s decision to pull out of the nuclear deal with Iran are expected to dominate attention during today’s trading. Meanwhile, uncertainty surrounding Italy’s political scene is also expected to be one of the topics that will be on investors’ radar.

At 0730 GMT, Swedish inflation figures for the month of April will be made public, bringing into focus krona pairs. Meanwhile, a Riksbank executive board meeting will commence a little earlier (0700 GMT).

Producer price data out of the US will be released at 1230 GMT. Overall, PPI numbers are anticipated to show that factory prices eased in April. The figures come ahead of tomorrow’s respective data on consumer prices, which are perhaps more likely to lead to fairly considerable movements in dollar pairs. Wholesale inventory data for March are also on the agenda out of the US (1400 GMT).

Also at 1230 GMT, Canada will be on the receiving end of building permits data for March.

Oil traders will be paying attention to EIA weekly data on US crude stockpiles. Crude oil inventories are anticipated to decline by 0.7 million barrels during the week ending May 4, after a notable buildup in the previously tracked week. However, investors digesting the impact on oil supply after Trump’s decision to exit the Iran nuclear deal, how things play out in the Middle East, and the reaction of other players – for example, European counterparts – who were part of the deal, will definitely be the main driver of movements in oil prices during today’s trading and in the days to come. For the record, Iran is OPEC’s third largest producer.

Quarterly earnings continue rolling in in equity markets, though overall sentiment could again be driven by the geopolitical developments just mentioned.

Atlanta Fed President Raphael Bostic, a voting FOMC member in 2018, will be talking on the US economic outlook and monetary policy at 1715 GMT.

Lastly, Italian politics are also on center stage, weighing on the common currency. The country may head to fresh elections soon after President Sergio Mattarella’s attempt to form a government led by technocrats was unsuccessful. In the meantime, populist-perceived forces are seen as strengthening. Also in politics, any updates on the trilateral summit between Japanese PM Shinzo Abe, Chinese Premier Li Keqiang and South Korean President Moon Jae-in will be closely watched. 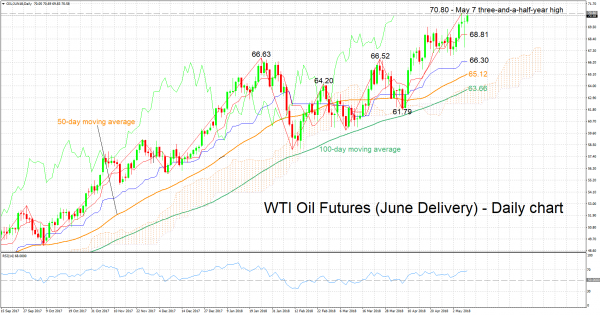 WTI oil futures for June delivery are on their sixth straight day of advances, with price action currently challenging the three-and-a-half-year high of 70.80 hit on Monday. The positively aligned Tenkan- and Kijun-sen lines are projecting a bullish picture in the short-term. The RSI which is on the rise supports this view, though notice as well that the indicator is close to entering overbought territory at 70.

Should geopolitical developments clearly point towards the direction of oil supply being taken out of the market, then prices are expected to head higher. Immediate resistance to gains could be coming around Monday’s three-and-a-half-year high of 70.80, including the 71 round figure. The 72 handle may act as an additional barrier further above.

Conversely, if oil supply is not seen as negatively affected, or at least not to a significant extent, then prices are likely to fall. Support to declines might come around the 70 level that may be of psychological importance and the current level of the Tenkan-sen at 68.81 (including the 69 handle) in case of a downside violation. Further below, the area around the Kijun-sen at 66.30 will increasingly start to come into focus.

The EIA’s weekly report on crude stocks due later on Wednesday can also spur some movements in oil prices.