A stronger US currency may have brought a smile to the face of policymakers in Japan and the Eurozone, as their export-reliant economies stand to benefit from a weaker exchange rate, but the dollar rally of the past month has generated unwelcome volatility for emerging market (EM) currencies, raising concerns of a new EM crisis.

Emerging market currencies have been making the headlines in recent weeks, particularly the Argentine peso and the Turkish lira, which have been repeatedly hitting record lows against the US dollar. Although weaknesses among EM economies are not directly related to exchange rate volatility, an appreciating dollar on the back of rising US treasury yields tends to bring under the spotlight the countries most at risk of a crisis. These are typically countries running large current account deficits, which rely on foreign capital inflows to plug the gap.

When US Treasury yields go up, this draws funds away from riskier assets, including EM assets, into fixed income assets, mainly government bonds. Another effect of higher Treasury yields is increased borrowing costs, which applies to businesses not just based in the United States but for overseas investors as well. EM countries with a large exposure to dollar-denominated debt would be the most hit by rising US yields. Furthermore, dollar-denominated debt becomes additionally expensive to repay when the dollar appreciates against the local currency. 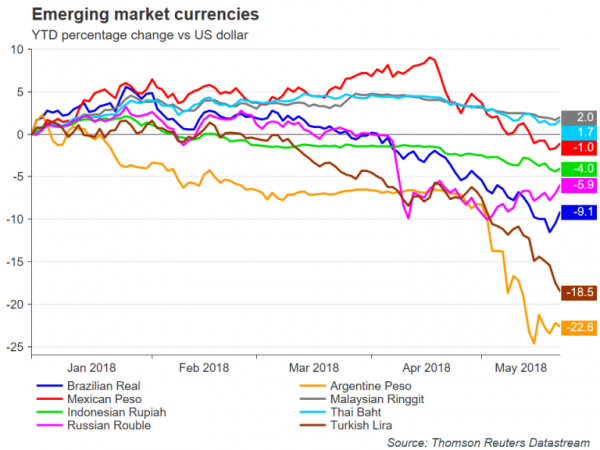 These in turn put pressure on EM currencies that fit the above description, and at the moment, the Argentine peso and Turkish lira seem to fall into that profile. Ofcourse, there are other factors that are troubling investors about the prospects of the Argentinian and Turkish economies. But it is the possibility of even higher US yields and stronger dollar that is an immediate threat to triggering a collapse in the respective currencies.

The Argentine peso has plummeted by over 30% so far this year. It touched an all-time low of 24.999 pesos per dollar on May 15 even after the country’s central bank hiked rates to a staggering 40%. The Argentinian government has been resorted to request aid from the IMF, but it was an intervention by the central bank in forex markets that finally helped the peso to stabilise.

The Turkish lira on the other hand isn’t yet showing any signs of putting an end to its streak of record lows. It is down by over 20% versus the dollar in the year-to-date, hitting an all-time low of 4.9921 liras per dollar only today. The main concern for investors is the reluctance of the Turkish central bank to aggressively raise interest rates to defend the lira amid opposition to such policy by the country’s autocratic president. The lira is highly vulnerable to an appreciating dollar given Turkey’s high private sector debt to GDP ratio (of which more than half are issued in foreign currencies) and large current account deficit. 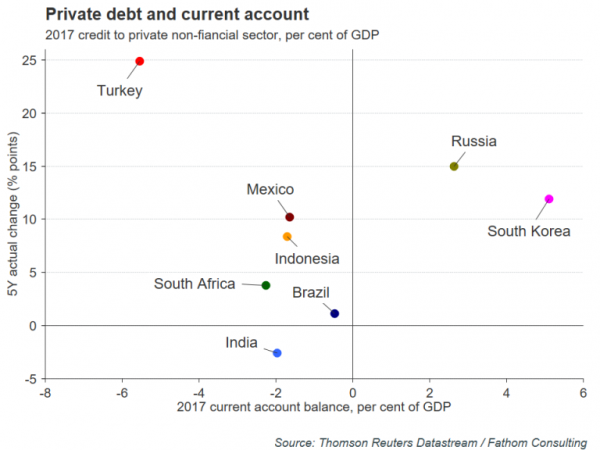 Other EM currencies have also suffered sharp losses this year. The Brazilian real is down by about 10% in 2018, led by concerns about presidential elections in the country in October. Markets are worried that Brazil’s next leader may undo much of the economic reforms carried out by the current president, which have helped the economy recover from a steep recession in 2014-16.

Among southeast Asian currencies, the Indonesian rupiah is the worst performer. The rupiah has come under pressure on weaker-than-expected growth in Indonesia during the first quarter, but the big risk for the rupiah is the dangerous combination of higher oil prices and rising US yields, which is causing large capital outflows.

Should the dollar and US borrowing costs maintain their ascent in the coming months, there is a real possibility that the stress in emerging markets develops into a full-blown crisis, resulting in a further collapse of currencies such as the peso and the lira, accompanied by a stock market crash, and forcing governments to default on their debt. Many analysts have cited the growing debt burden and larger current account deficits of EM countries since the 2008 financial crisis as a cause for alarm, as it places them in a poor position to deal with the pressures of a strengthening dollar and rising US interest rates.

With the US economy showing no sign of running out of steam, it’s unlikely that the view the Federal Reserve will stick to its gradual rate hike course will alter anytime soon. However, were the dollar to back off from current multi-month highs or even reverse lower, this could alleviate the selling momentum for EM currencies, at least temporarily. 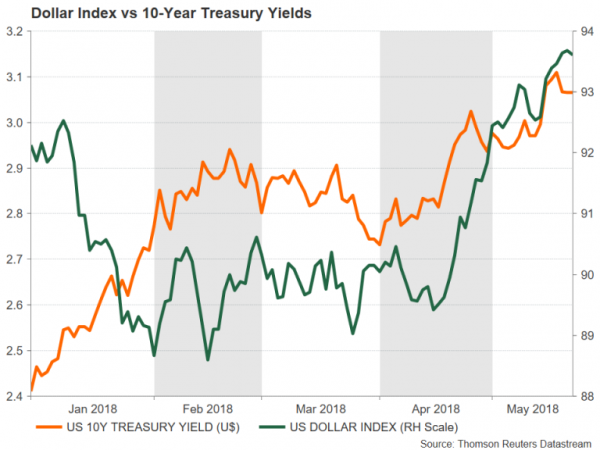 A pullback in the greenback is not too improbable if inflation in the US fails to take off and/or a rebound in European and Japanese growth materialises. While the Fed will almost certainly be following inflation developments very closely and adjust policy accordingly, the big question is whether policymakers at the US central bank will respond to any downturn in emerging markets, especially in Asia.

In the past, the Fed held off raising rates when market volatility spiked during the China stock market crash in 2015 and the Brexit referendum in 2016. However, with the US economic fundamentals looking much more robust now and an overall upbeat global growth outlook, the Fed may not see the need to slow or halt its rate hike cycle.

An unresponsive Fed to unfolding events in emerging markets could make the recipe for a fresh EM crisis. The next Fed meeting on June 12-13 could provide investors with some clues as to the extent to which new Chair, Jerome Powell, is worried about external headwinds such as the growing signs of stress in emerging markets.

If the sell-off in EM currencies has not subsided by then and the Fed remains committed to its current policy path, or even signals a faster pace of rate hikes, EM currencies are likely to come under greater pressure. However, should policymakers show some sensitivity to the potential repercussions of further gains in the dollar and US yields, investors might scale back pulling their funds out of EM assets, easing pressure on EM currencies.