EURUSD is holding below the strong resistance obstacle of the 23.6% Fibonacci retracement level around 1.1760, over the last month. However, over Friday’s trading session the world’s most traded currency surpassed the 20- and 40-simple moving averages (SMAs) in the daily timeframe, indicating a possible upside correction.

Having a look at the technical indicators, the RSI is flattening slightly above the threshold of 50, while the MACD oscillator failed to jump into the positive territory but still stands above the trigger line. It is worth mentioning that the moving averages are in the process of posting a bullish crossover in the near term indicating further possible gains.

A bullish rally is likely to find resistance at the aforementioned strong barrier of the 23.6% Fibonacci mark (1.1760) before being able to re-challenge the 1.1840 key level, taken from the June 7 high. Rising above this area would help shift the focus to the upside towards the 38.2% Fibonacci of 1.1910. Breaking this level could see a touch of the 1.2000 psychological level, which stands near the 200-SMA in the medium-term.

Conversely, if the price dives below the short-term moving averages, the bearish phase would remain in play especially if the price hit again the 1.1510 – 1.1530 support zone. Clearing this area would see additional losses towards the 1.1300 handle, identified by the high on November 2016.

To sum up, EURUSD would be stuck in a sideways channel in the short term if it hits again the 1.1840 resistance and reverses lower again. Though, a climb above this level could endorse the scenario for a period of gains. 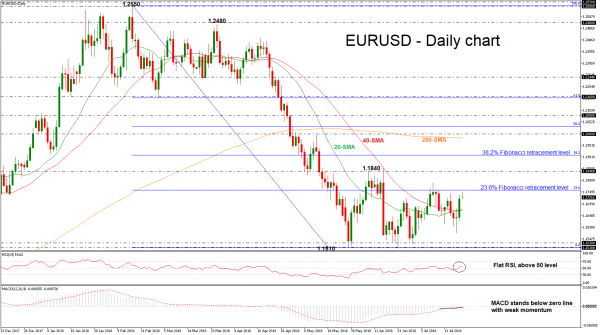