Up from there, the bounce to 129.47 high ended wave ((iv)) as a Flat correction. Below from there, Minute wave ((v)) is taking place at the moment in another 5 waves structure looking to extend lower 1 more time approximately towards 127.44 200% inverse extension area of Minute wave ((iv)) before ending the Minor wave A lower. In case of further downside extension area, the pair can see 127.29-126.78 100%-123.6% Fibonacci extension area of ((v))=((i)) target area as well before ending Minor wave A lower. Afterwards, the pair is expected to do a bounce in Minor wave B in 3, 7 or 11 swings before pair turns lower again. We don’t like buying the pair. 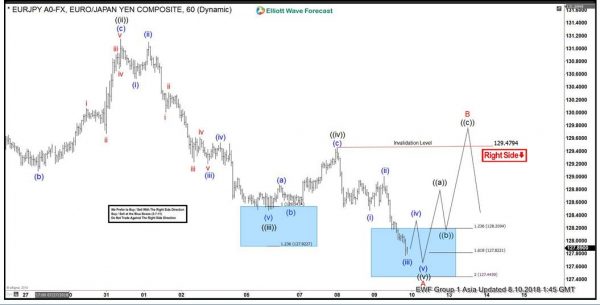