The Euro bounced after weaker than expected US NFP data but gains were so far capped by daily cloud which twists today (1.1545) and attracts.

Recovery might be short-lived as daily bears are firmly in play and US jobs data are overall positive, as earnings remain steady, unemployment fell to the lowest in 48 years while fall in non-farm payrolls could be described as seasonal and strongly affected by bad weather.

Bearish stance is confirmed by the second consecutive weekly close in red, with further negative signal expected on today’s close below the base of thick weekly cloud (1.1562).
On the other side, dollar’s bulls may take a breather on overbought conditions and inflate Euro for further recovery.

Scenario requires confirmation on break and close above thickening daily cloud, which would sideline immediate downside risk, but extended recovery upticks should face strong headwinds from converging 55/10SMA’s at 1.1600 zone. 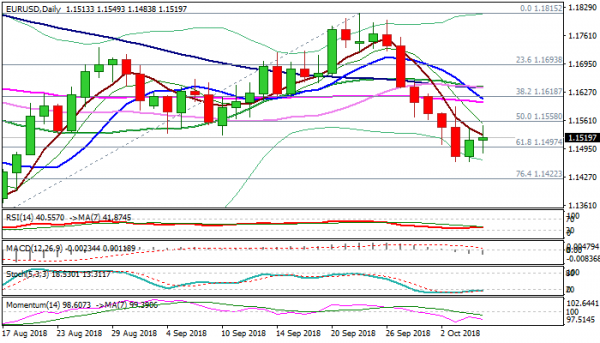