The pair moved higher in early Friday’s trading and holding in green for the first time after six-day steep fall.

This was an initial signal that bears might be running out of steam and could enter consolidative/corrective action.

Oversold daily slow stochastic is turning up and formed bull-cross, adding to positive signals. Recovery attempts were so far limited by sideways-moving daily Kijun-sen (112.46), with break higher and weekly close above it, to generate bullish signal and form reversal pattern on daily chart.

Failure to clear Kijun-sen barrier would signal extended consolidation and keep the downside vulnerable, while break below 111.97 pivot would signal continuation of last week’s steep downtrend.

Completion of Doji reversal pattern on weekly chart, following last week’s strong fall which is on track to end week in long bearish candle, adds to negative signals and suggests that corrective upticks would be positioning ahead of fresh weakness. 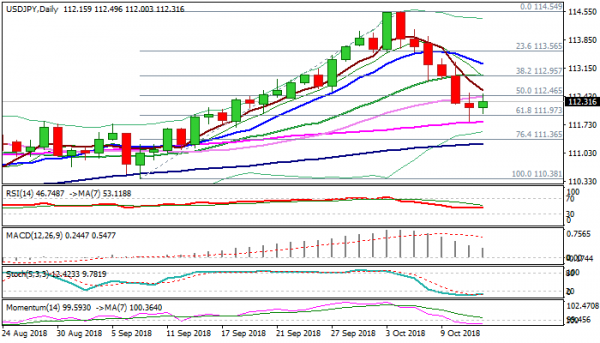