The US 500 index has come under renewed selling pressure falling back below its 200-day simple moving average (SMA) and beneath the long-term ascending trend line. Despite today’s rebound, the index has posted a fresh lower low, which makes traders more confident for further declines for now. Moreover, the price dipped below the Fibonacci levels, erasing the scenario for a possible bearish correction rally and confirming the negative outlook.

Looking at momentum oscillators in the daily chart though, they suggest further declines may be on the cards in the short-term. The RSI is below the threshold of 30 but pointing slightly upwards, indicating an overstretched sell-off. The MACD, already negative, lies below its trigger and zero lines.

In the negative scenario, where the price continues to slip below yesterday’s almost six-month low of 2651, the next strong hurdle to focus on is the 2600 handle, achieved on May 3. If the market manages to penetrate that area, traders could look for support at 2532, taken from the trough on February 6.

A reversal to the upside could stall at the 61.8% Fibonacci retracement level of the upleg from 2535 to 2940, around 2687. Higher up, the 50.0% Fibonacci of 2736 could also provide resistance and any violation at this point could potentially trigger further buying interest in the market, probably leading the price up to the 38.2% Fibonacci of 2784.

To sum up, the short-term bias is bearish after the significant sell-off on Wednesday and the tumble below the ascending trend line, which had been standing since February 6. However, the medium-term outlook looks neutral at the moment. 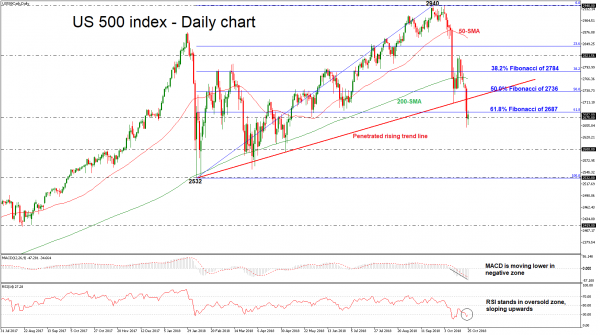