The dollar index which track performance of the US dollar against the basket of major world currencies, hit new over sixteen-month high on Wednesday. The greenback extended larger rally from September’s base at 93.40 and probed above key short-term barrier at 96.85 (15 Aug high), marking full retracement of 96.85/93.40 corrective phase and signaling continuation of larger uptrend from 2018 low at 88.14 (16 Feb). Stronger stock markets, higher US Treasury yields and increased demand at the end of the month, lifted dollar further, helped by stronger than expected US private sector jobs data. ADP report, released today, showed private sector added 227K in Oct, beating forecast for 189K and downward-revised Sep result at 215K. The report comes ahead of more significant government’s Labor department non-farm payrolls report, due on Friday and could be seen as indication for NFP release which includes employment changes in both, private and public sector. Technical indicators suggest that dollar’s uptrend could extend, with strong bullish signal expected on close above previous high at 96.85, which would open way towards next pivotal, double-Fibonacci barrier at 97.82 (Fibo 61.8% of larger 103.80/88.14, Dec 2016/Feb 2018 downtrend /FE 138.2% of the waveC from 94.46). Bullish daily techs support scenario, as uptrend from 93.40 base rides on the third wave of five-wave sequence, which cracked its FE100% (96.90) in attempt to validate wave principles. Daily indicators continue to trend higher despite overextended conditions and signaling that bulls are not running out of steam, however, consolidative / corrective action in coming days cannot be ruled out. Rising 10SMA (96.12) marks strong support which is expected to contain stronger corrective dips and keep bulls intact. 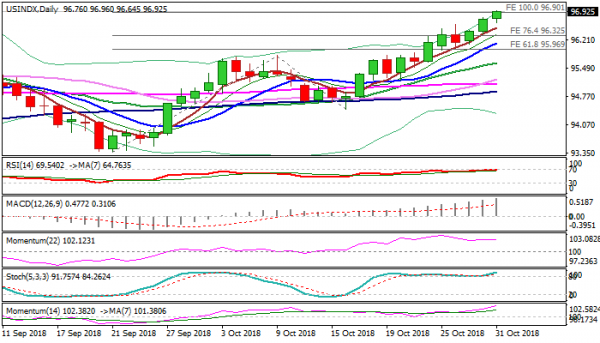