USDCAD has been struggling below the 23.6% Fibonacci retracement level of the upleg from 1.2060 to 1.3663, around 1.3285 over the last seven days, following the bearish rally from the 19-month high of 1.3663. The price also remains below the simple moving averages (SMAs) which are turning lower, signaling a bearish crossover in the near future.

Looking at the technical indicators, in the daily timeframe, they seem to be in agreement with the latest movement in the very short-term. The RSI is marginally rising below the neutral threshold of 50, while the MACD oscillator is moving beneath the zero and trigger lines, weakening its momentum.

In case of further downside pressures the pair could run towards the next immediate support level of 1.3160, increasing chances for a deeper negative correction. Even lower, if the price fails to hold above the aforementioned level, it could re-touch the 38.2% Fibonacci of 1.3050, which overlaps with the support level taken from the lows on November 7.

In the alternative scenario, if the price jumps back above the 23.6% Fibonacci it could find a stop around the 40-day simple moving average near 1.3370. A successful move above this level could move the market towards the 20-day SMA of 1.3410, while more advances could hit the 19-month peak of 1.3663.

To sum up, in the bigger picture USDCAD has been developing in an ascending tendency since September 2017, while in the short-term, bears have taken control for some correction. 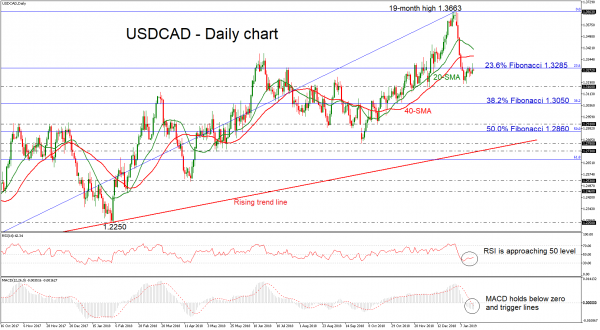 New Quarter Yet to Provide Sunshine of Hope for Global Markets

USD, JPY Strengthen In The Face Of Global Slowdown