USDCAD gained little after its freefall to one-month lows, rising slightly above the 50% Fibonacci of the upleg from 1.2781 to 1.3663 to start consolidation.

In the short term the pair could see some recovery as the RSI heads towards its 50-neutral mark, though as long as the indicator holds in negative territory, downside movements cannot be ruled out. The MACD continues to fluctuate below its red signal line, supporting that downside risks are still high as well.

Should the market improve, the 38.2% Fibonacci of 1.3325 could reasonably act as an immediate resistance as the bulls were unable to break that mark in recent sessions. If this proves a weak obstacle instead, then the focus will shift up to 1.3385, taken from the high on June 27. Higher, the 23.6% Fibonacci of 1.3455 and the 1.36 round level could be next in target.

Alternatively, in case negative pressures dominate, the area between the 50% Fibonacci of 1.3221 and the 1.3170 barrier may appear restrictive once again, while below that it would be more interesting to see whether the bears can pierce the 200-day simple moving average currently at 1.3094. A decisive close under that line could trigger steeper declines probably towards 1.2960, where the 78.6% Fibonacci is standing.

In the medium-term picture, the positive outlook has somewhat faded after the sell-off from 19-month highs and is set to turn neutral below 1.3170. Yet the positively sloped 50-day MA, which continues to distance itself above the 200-day MA,suggests that the bull market could hold for longer. 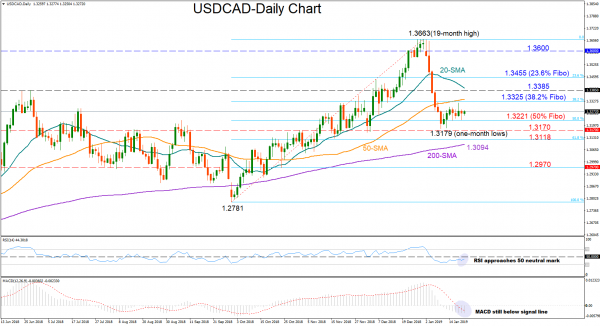