This past week, there was a solid upward move above the 1.2900 resistance in the British Pound against the US Dollar. The GBP/USD pair traded as high as 1.3000 and later started a downside correction.

Prices are approaching the 38.2% Fibonacci retracement of the October to December drop at $55.539

The API weekly crude oil stocks data as at January 18 are due tomorrow. Lat week saw a drawdown of 560,000 barrels, the third consecutive weekly reduction. 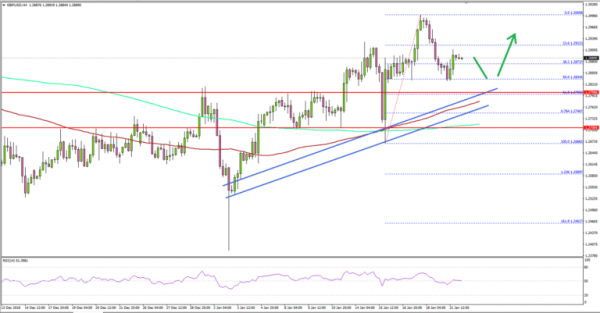 Therefore, there are many supports on the downside near the 1.2800 level. Once the current correction is complete, the pair is likely to bounce back above 1.2900 and 1.2940 in the near term.

Fundamentally, China’s GDP report for Q4 2018 was released recently. The market was looking for a change of 6.4% in Q4 2018, compared with the same quarter a year ago.

Overall, the result was slightly bearish, pointing slowdown in China. Therefore, there could be short term downsides in GBP/USD and EUR/USD before a fresh upward move.

US Dollar Falls On Month-End Flows