Silver retreated after jumping towards a new seven-month high of 16.20 during Wednesday’s session. The bullish picture in the very short-term looks to last for a while longer as prices remain above the 20- and 40-simple moving averages (SMAs). Also, the price failed to slip below the red Tenkan-sen line and is holding above the Ichimoku cloud.

Technically, in the daily timeframe, the RSI lies in positive area and is falling, however the MACD oscillator printed a bullish cross with its trigger line in the positive area as well. Both indicators are creating a negative divergence as the price is rising and the indexes are declining, signaling a possible weak movement.

In case of a continuation of the bullish move, traders could break the 16.20 resistance and send prices towards the 16.47 barrier. More advances could drive the market to the next stop which stands even high at 17.30, where it topped on June 14.

Alternatively, additional declines may drive the price towards the 20-day simple moving average (SMA) around 15.80 at the time of writing, before the price touches the 40-day SMA around 15.65. Beneath the latter, 15.46 could be another level in focus as well as the bottom of the lower band of the Ichimoku cloud near the 14.90 support.

Summarizing, in the long-term view, the white metal has remained in a downtrend since July 2016, without a significant bullish correction. 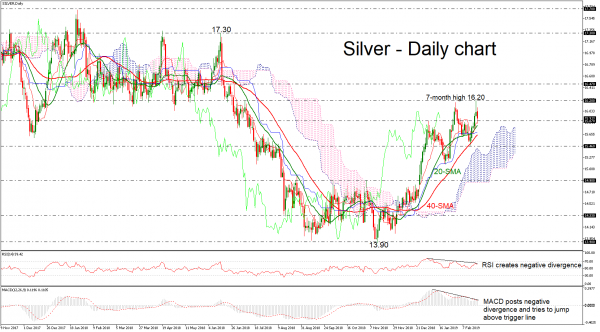 Silver: White Metal Extends Its Gains In The Asian Session

Silver Spot Continuation Of The Rebound

Silver: White Metal Trading On A Stronger Footing This Morning