NZDUSD corrected below two-week lows after the RSI reached overbought territory, with the price launching slightly above the 50-period moving average in the four-hour chart on Thursday. On Friday the market resumed bullish momentum, but with the RSI reversing towards its 50 neutral threshold and the MACD moving under its red signal line, the recovery may probably not continue in the short term.

The 50% Fibonacci of 0.6822 of the downleg from 0.6900 to 0.6743 could act as support in case selling pressure strengthens. Another leg lower would open the door for the 50-period MA which currently stands at 0.6810 and marginally above the 38.2% Fibonacci. Should the price continue to decline, attention will shift straight down to the 0.6788 level, a key barrier during February.

On the upside, the area between 0.6852 and 0.6870 will be closely watched if bullish action returns. A rally above this region would bring the 0.69 peak into view, which if broken could shift attention towards the 0.6940 level taken from the high on February 1.

In the bigger picture, NZDUSD is holding a neutral profile within the 0.69-0.6740 area. 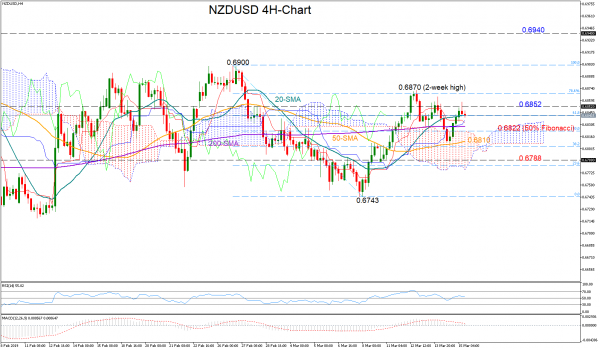