NZDUSD stood tall on Wednesday by almost 1% after trading flat over the past week. The pair stretched further its rally to new one-and-a-half-month highs on Thursday, but the bulls found a familiar barrier around 0.6940, with the Stochastics flagging an overbought market – the red %D line and the green %K line are returning above 80. The RSI continues to point up, though less aggressively than in previous days, giving some signs of weakness near a former resistance area.

Meanwhile in the medium-term picture, NZDUSD is trading within the 0.6968-0.6650 range. Chances for a bull market seem to be improving as the 50-day MA keeps increasing distance above the 200-day MA, but slowly so.

In brief, NZDUSD could see a softer positive momentum in short term, while in the medium-term, the pair holds neutral below 0.6968 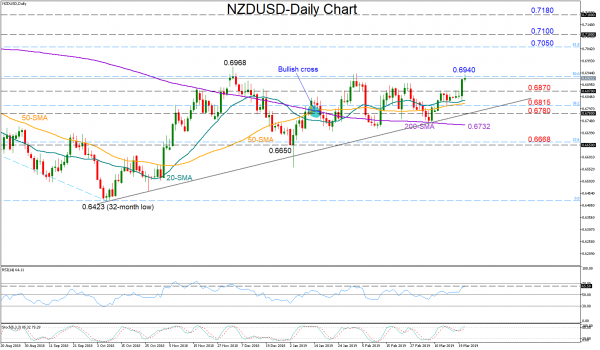 The Loonie Continues to Soar