NZDUSD reached a fresh three-month low of 0.6665 on Wednesday but it failed to end the day below the medium-term consolidation area with upper boundary the 0.6940 resistance and lower boundary the 0.6720 support. The pair remains slightly below the 200-day simple moving average (SMA) suggesting more losses, while the RSI indicator is sloping south in the negative territory.

If the bears manage to take control and penetrate the sideways channel, support would likely come from the lower boundary near 0.6705. A close below this level as well, could confirm the forthcoming bearish structure until yesterday’s low of 0.6635 before touching the 0.6610 support.

On the other hand, an extension to the upside could find resistance around the 20- and 40-day SMAs currently at 0.6780 and 0.6800 respectively. Higher still, immediate resistance of 0.6835 could attract traders’ attention.

Concluding, NZDUSD lacks direction and investors should be waiting for an exit of the range before placing orders. 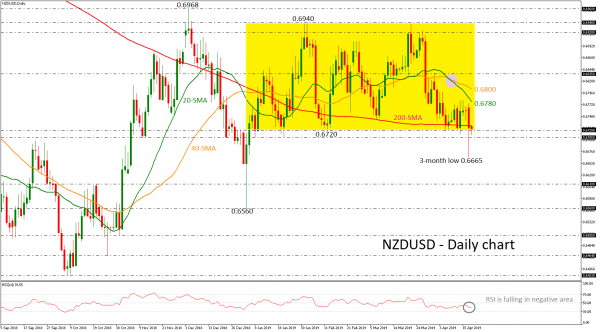