GBPJPY has been on a sideways move for the most part of the week as the 23.6% Fibonacci retracement level of the upleg from 132.48 to 148.85, around 145.00 and the 200-day simple moving average seem to be critical obstacles for the bears. From the technical point of view, the price could lose some momentum in the short-term as the RSI is flattening below the 50 level and the stochastic oscillator is approaching oversold territory.

Another rebound on the 23.6% Fibonacci could send prices again towards the immediate resistance of 147.00, surpassing the 20- and 40-day SMAs. Should the price overcome that handle, resistance could run up to the 148.40 barrier and also the four-month high of 148.85 which may also prove a challenge for traders.

In the medium-term picture, GBPJPY should resume its upside trend above the four-month high of 148.85, however a dive below the 38.2% Fibonacci would bring the bearish outlook into play. 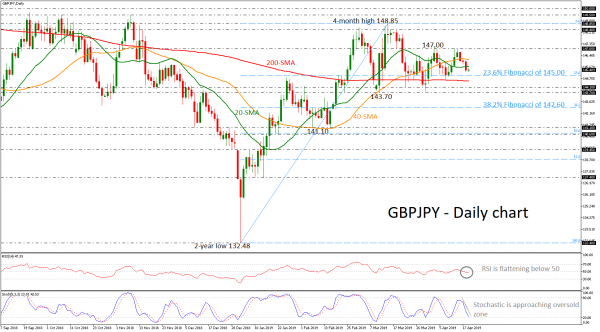 GBP/USD Rises To A Five-Week High