After a strong decline, the British Pound found support near the 143.75 level against the Japanese Yen. The GBP/JPY pair started an upward move and broke the 144.00 and 145.00 resistance levels. 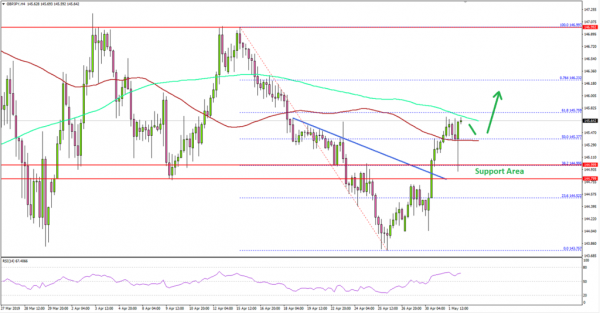 Besides, there was a break above a connecting bearish trend line with resistance at 144.90 on the same chart. Finally, the pair settled above the 145.40 level and the 100 simple moving average (red, 4-hours).

On the other hand, if there is a downside correction, the previous resistance near 145.40 and the 100 simple moving average (red, 4-hours) are likely to provide support.

Overall, GBP/JPY is trading nicely with a positive bias and it is likely to climb further above 146.00 in the near term. GBP/USD too recovered recently and broke the key 1.3000 resistance level. Today in the UK, the BoE Interest Rate Decision is scheduled, which might impact the market sentiment for the British Pound.

GBPUSD Within A Bullish Rectangle But Risks Remain