EURGBP has been in the green so far this month, fully recovering the sell-off towards the 0.85 level emerged at the end of April. The short-term risk is still positive as long as the RSI and the MACD strengthen in bullish area, yet some caution is likely needed as the Stochastics seem to be reversing lower in overbought territory (above 80).

Should the pair extend rally, immediate resistance is expected to appear within the 0.8700-0.8720 zone, where the upper Bollinger band is currently located. A steeper upside could also challenge the 200-day simple moving average (SMA), which if broken could significantly increase buying orders, shifting the medium-term outlook from neutral to bullish.

In case the market proves overbought, the price could meet the middle Bollinger band at 0.8615. Breaking even lower and under the 50-day SMA, the decline may pick up steam towards the 2016 low of 0.8526 and the 0.85 round level.

In brief, EURGBP remains bullish in the short-term picture, while in the medium-term the outlook holds neutral 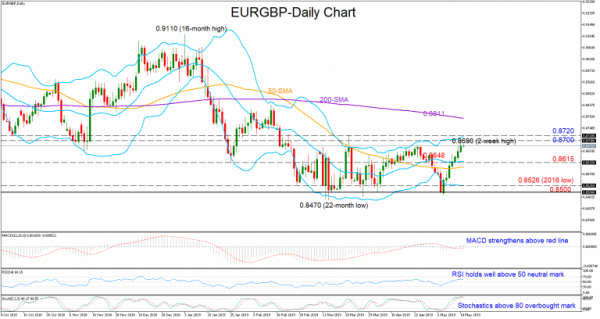