WTI oil opened with 25 pips gap higher on Monday and rallied to the highest level ($63.78) since 1 May, boosted by rising tensions in Persian Gulf and signals that OPEC+ group would probably maintain production cut.

Though rhetoric from the US following last week’s attack on Saudi Arabia’s oil assets and Sunday’s rocket attack on Baghdad, increase fears of military conflict with Iran that would involve a number of countries in the region and could easily spread further.

Sustained break higher is needed to confirm an end of corrective phase from $66.58 high and open way for further recovery.

On the other side, overbought stochastic warns that recovery may slow, but bullish outlook is expected to remain while the price holds above broken 20SMA ($62.82). 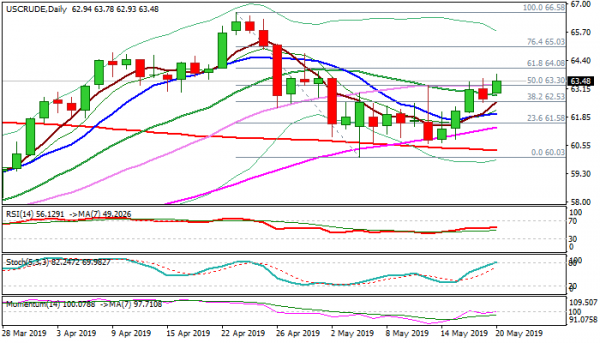