GBPCHF bears are keeping control of the pair for the sixth consecutive week, driving it down by more than 6.0% since the peak at 1.3398 and near an almost five-month low of 1.2539.

Specifically, the price is far below its simple moving averages (SMA) at the moment, suggesting that the downward pattern may not be easy to reverse in the short-term. The momentum indicators are also painting an overall cloudy picture for the short-term as the red Tenkan-sen continues to point down below the blue kijun-sen. The MACD is showing a soft upside tendency and the RSI has been fluctuating in the oversold area for almost a month, increasing the chances for an upward correction although as long as it remains in the bearish zone, the risk remains negative.

Should the price return above 1.26, immediate resistance could appear around 1.2680 and near the 20-day SMA (1.2700). Further up, the bullish action may strengthen until it potentially meets the 1.2780 barrier.

Meanwhile in the medium-term context, the situation is also bearish, with the negatively sloped 50-day SMA decreasing hopes for an outlook reversal.

In brief, GBPCHF is still facing bearish pressures both in the short and the medium-term picture. 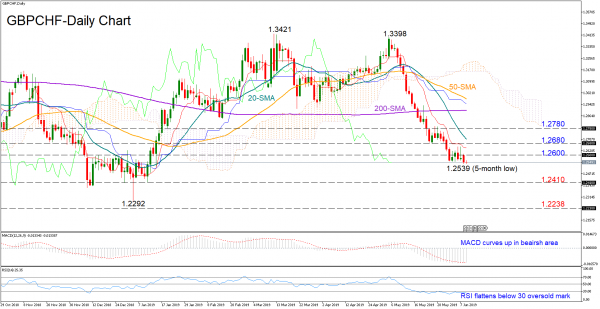 U.K. May Not Be Expecting A Deal

GBP/USD Attempts To Recover After A Pullback