USDMXN has dropped considerably over the previous couple of days, after the negative gap, remaining within the 200- and 50-day simple moving averages (SMAs). Currently, the pair is also hovering in the Ichimoku cloud and is trying to surpass the 23.6% Fibonacci retracement level of the downleg from 20.6540 to 18.7440 near 19.1938.

Looking at the technical indicators, the stochastic oscillator is turning higher in the oversold zone, giving the impression for a bullish crossover of the %K and %D lines in the daily timeframe. The RSI is pointing north around the 50 level, supposing the end of the negative rally.

A failure to overcome the immediate resistance (19.1938) could drive prices lower, below the 50-SMA and towards the 18.9545 support. More declines could give the green light for a retest of the 18.7440 hurdle.

In the medium-term picture, USDMXN turned neutral as it has been developing within the congestion area of 18.7440 – 19.8744 over the last six months. In the short-term, traders should wait for a jump above the 200-SMA or a decline below the 50-SMA. 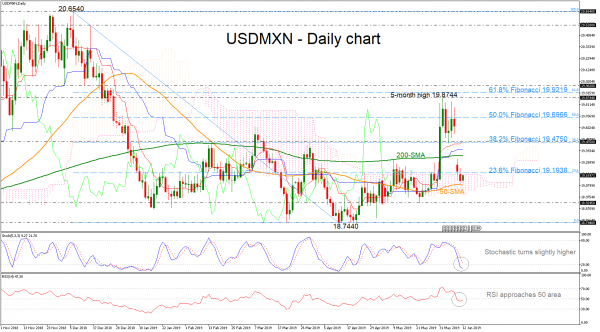