USDJPY extended yesterday’s sell-off below the 108.00 psychological mark today and the mid-level of the Bollinger Band (20-day simple moving average) as well as the 23.6% Fibonacci retracement level of the downfall from 112.40 to 106.77. The pullback on the seven-week high of 109.00 shifted the marginally bullish bias to neutral in the short-term.

Looking at the momentum indicators, the RSI is falling below the 50 level, while the stochastic oscillator has already completed a bearish crossover within its %K and %D lines in the overbought zone, suggesting the end of the bullish phase.

If prices continue to head lower, support should come from the lower Bollinger band, which overlaps with the 107.05 barrier. A drop below it would open the door for the five-month low of 106.77 before attention turns to the 105.65 area.

However, should an upside reversal take form in the congestion area, immediate resistance will likely come from the 40-SMA, around 108.50. A break above this line would hit the upper boundary of the channel near the 38.2% Fibo of 108.90 and the 109.00 round number. More advances could also reach the 50.0% Fibo of 109.60, switching the short-term outlook back to bullish.

To summarize, USDJPY is currently looking neutral in the short-term timeframe, while in the medium-term the picture is seen bearish unless the price returns to the 109.00 key level. 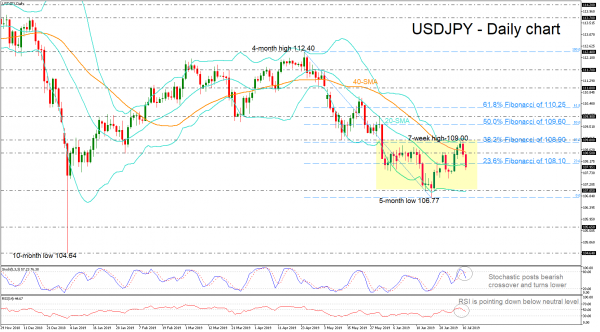