EURCHF is moving lower near 1.1100, remaining below both its 20- and 40-day simple moving averages (SMAs) as well as beneath the 1.1170 resistance. The bigger picture still seems negative as the price has been developing in a descending channel since September 2018.

Short-term momentum oscillators concur, with the RSI holding below 50 and pointing lower, and the stochastic completed a bearish cross within the %K and %D lines in the daily timeframe.

More downside pressures could meet support near the almost two-year low of 1.1055, defined by the low on June 20, with a downside break opening the door for the 1.1000 significant handle, taken from the inside swing top on May 2017. This could endorse the scenario for stronger bearish structure.

In brief, some further losses shouldn’t be ruled out in the immediate term, but as long as the price remains in the downward sloping channel, the broader outlook is negative. 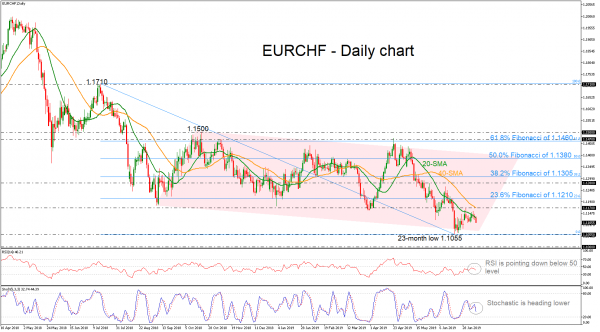