Yet the higher highs and the higher lows over the last year and a price well above simple moving averages (SMA) and the Ichimoku cloud suggest that the upward pattern may stay for longer period.

The 20-day SMA has been capping bearish movements in the past four weeks and hence could reasonably attract attention if the bears retake control. A decisive close below that line and more importantly under the 50% Fibonacci of 1,421 would shift the spotlight towards the 1,400-1,380 area, where any break lower would confirm the end of the bullish phase. In the medium-term picture, however, the sell-off should run under 1,350 to resume neutral conditions.

Summarizing, gold is holding a positive status, though some weakness is likely to emerge in the near-term as the market seems to have entered overbought borders. 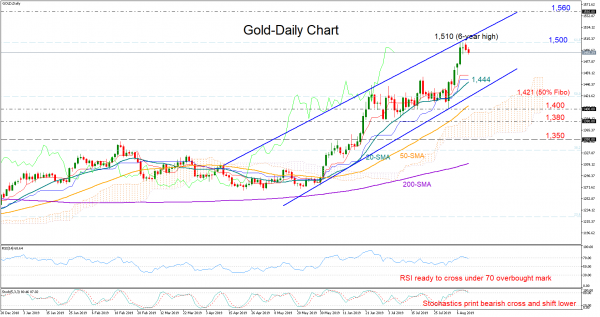 Coronavirus Remains Investors’ Top Concern For The Week Ahead