EURJPY plotted a twenty-eight-month low of 117.51 and then adopted a sideways demeanor over the last week. The pair was unable to push beneath, as momentum dried up, something indicated by the candles as well as the squeeze which formed in the Bollinger bands.

The medium-term trend remains negative, also reflected by the 50- and 100-period simple moving averages (SMAs) on the four-hour chart which are sloping downwards. For now, though, the momentum indicators reflect a neutral picture with the MACD slightly above its trigger line in the negative zone and near the zero line. Furthermore, the RSI inclined marginally above the 50-level.

If the bears retake control and move below the middle Bollinger band currently at the 118.00 level, some support could come from the lower Bollinger band before retesting the 117.51 low. Penetrating the low could then draw the attention to 116.45, which is the trough of 21 April 2017.

Overall, the medium-term bearish bias seems to prevail. For the picture to turn to neutral, the bulls would need to push above 120.04. 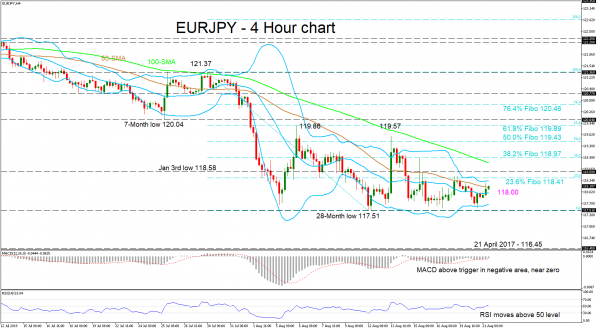