The precious metal was seen falling over 2% on Thursday. This came following a string of better than expected economic reports from the US. Mostly, the ISM non-manufacturing PMI alongside ADP payrolls and US factory orders helped to strengthen the USD on the day. Positive news from US/China trade talks also helped investors’ risk appetite to improve.

Further XAUUSD Declines Ruled Out as Support Holds for Now

The precious metal was seen extending the declines to the initial support area. The support level of 1508 was briefly tested but prices were rejected promptly. We expect to see a firmer retest of this level in the near term. There is also scope for price to post a modest rebound in the near term. However, a lower high is likely to be formed. 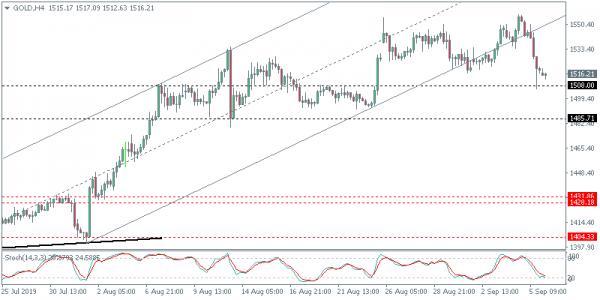 Gold Remains A Favorite Amid Uncertainty

Market Morning Briefing: USDCNY Could Trade Within The 6.95-6.99 Region In The Near Term

Asia On Its Own On President’s Day