Brent crude oil today gapped higher, propelling the commodity to levels not seen for three-and-a-half months. The price soared by 6.51 at the opening to reach a peak of 68.49, before black gold retraced down to 64.81, surrendering some of its gains. Yet, the bulls have resurfaced and revived the move up back above 65.52, which is the 23.6% Fibonacci retracement level of the up leg from 55.87 to 68.49.

The momentum indicators reflect a short-term positive picture, as the MACD has inclined above its red trigger line distancing itself into the positive territory, while the RSI hovers below the overbought zone.

If oil can climb above the 67.00 obstacle, another rally may revisit the peak of 68.49, before testing the 68.68 lower boundary of the gap from the end of May. Overcoming the upper boundary of that gap at 69.56, traders’ attention could then turn to the 70.57 resistance level.

Overall, the ‘explosion’ in the price has left the sentiment positive. A successful close above the 70.57 level would confirm the short-term bullish bias, whereas a move back towards 60.70 may bring back neutrality. 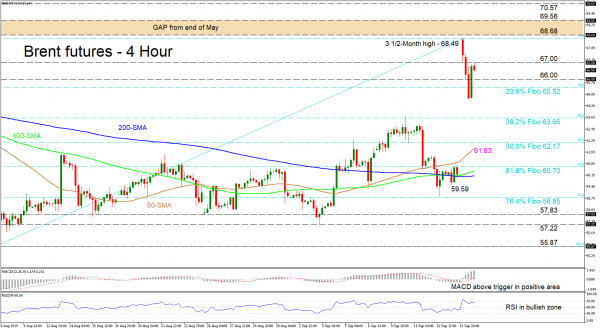 Crude Oil: Oil Trading On A Negative Footing In The Morning Session