The Euro holds in red for the third straight day and extension of pullback tested the top of thick daily cloud (1.1105) which presents significant support, as the price subsequently bounced.

The single currency consolidates after recent 1.0878/1.1179 rally and also tracks sterling which eased after Tuesday’s parliamentary vote, but kept high levels against dollar.

EURUSD’s daily indicators continue to warn as stochastic reversed from overbought territory and heading south while bullish momentum is fading.

However, near-term structure remains bullish and pullback is expected to stall, as solid supports at 1.1105/1.1085 (daily cloud top, reinforced by rising 10DMA) are expected to ideally contain and offer better opportunity to re-enter bullish market.

On the other side, violation of daily cloud top and 10DMA would sideline bulls for deeper correction, but bullish bias would remain in play if extended dips hold above 1.1030 (daily cloud base, reinforced by daily Kijun-sen).

Although the central bank is not expected to change the policy, the significance of tomorrow’s meeting is that it’s the last policy meeting under command of Mario Draghi, who is going to step down on 31 Oct after eight years in the position of ECB’s president. Despite being criticized for failing to consult broadly on key decisions and resuming a massive bond-buying, the majority of the ECB staff described his work as very good and outstanding, as Draghi managed to prevent a break-up of the Eurozone during the crisis. 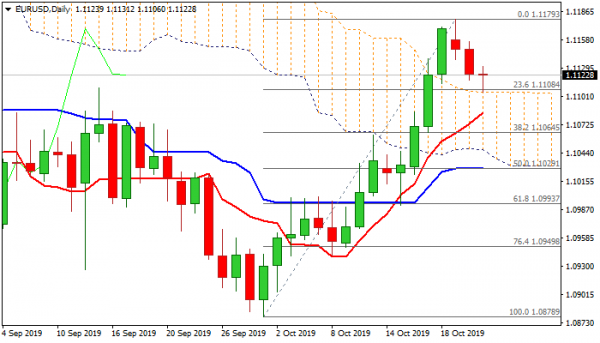