USDJPY is currently resting at the 108.43 level, which is the 50.0% Fibonacci retracement of the down leg from 112.39 to 104.45. The pair appears to be adopting a short-term sideways move, something also reflected by the mostly flat 100-day simple moving average (SMA), the convergence of the 200- and 40-day SMAs and the price squeeze by the Bollinger bands.

The technical oscillators suggest that upside momentum has dried up. The MACD remains in the positive zone below its red trigger line, but is starting to flatten out, while the RSI is presently flat at its neutral mark.

Alternatively, if buyers resurface and push above 109.00, where the mid-Bollinger band and the 200-day SMA reside, the 61.8% Fibo at 109.36 coupled with the upper Bollinger band could restrict additional gains. Should buying pressure persist, the price could rise towards the 109.92 resistance, and if this is also breached, the focus could turn to the 110.67 swing high of May 21 and the gap in the start of May.

In brief, the short-term bias looks neutral and a break either above 109.36 or below the recent swing low would determine the next direction. 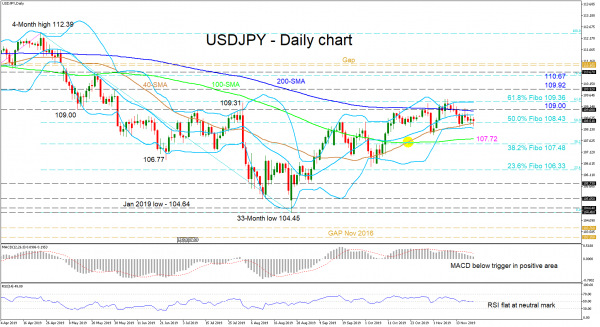