EURJPY is trading around the 120.42 level, which is the 23.6% Fibonacci retracement of the up leg from 117.06 to 121.46 and where the 200-period simple moving average (SMA) is presently located. Although the price is above all the SMAs, it is displaying an uncertain picture, with the stall in the market also reflected in the flattened SMAs and the conflicting signals in the short-term oscillators.

The technical indicators are exhibiting contradictory signals in directional momentum. The MACD is above its red trigger line and has just moved into the positive zone, while the RSI has turned downwards in the bullish region.

Overall, a neutral bias continues to exist in the short-term and a break either above 121.10 or below 119.10 would reveal the next direction. 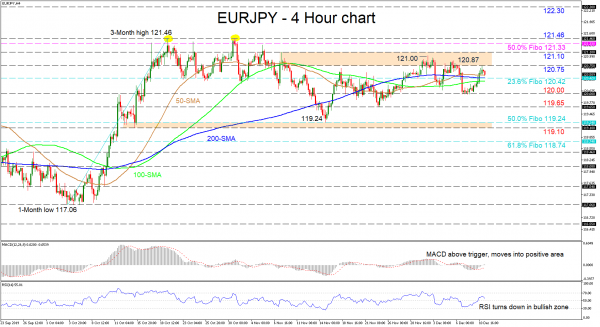 EURUSD Pulls Back From 3-Month Top