Brent futures extended their Wednesday losses and are currently trading far below the eight-month high of 71.30, slipping beneath the 20-day simple moving averages (SMAs) and the blue Kijun-sen line. However, in the medium-term the price has a bullish view confirmed by higher highs and higher lows.

The RSI turned lower after entering the bearish area. At the moment, it continues to head lower in support of a negative short-term picture. The bias in the very-short-term also looks bearish as indicated by the stochastics: the %K and %D lines are negatively aligned and are both moving further down. Moreover, the MACD oscillator completed a bearish cross with its trigger line in the positive zone.

Additional declines may drive the price towards the 40-day SMA currently at 64.40. Beneath this line, the 50.0% Fibonacci of the upward move from 56.10 to 71.30 at 63.70 and the Ichimoku cloud with the ascending trend line near the 63.00 psychological level could come in focus.

In case the pair changes its very short-term direction to the upside again, the bulls would probably challenge the 23.6% Fibonacci of 67.70. A break higher, could last until the 69.63 resistance, registered on September 16. Further up the area around the 70.73 resistance and the eight-month high could be another obstacle for upward movements.

Briefly, Brent crude oil futures maintain a bullish bias in the medium-term as the price still holds above the three-month ascending trend line. 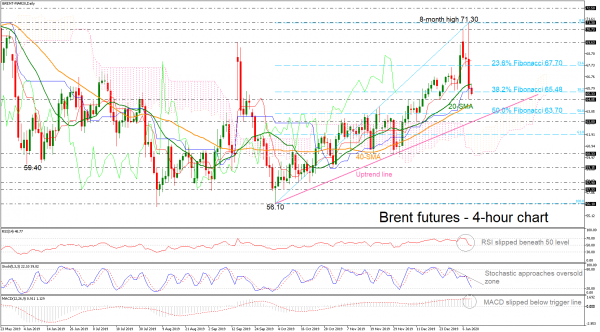