US dollar index futures are exposed to downside risks as regards the market trend. The first clue is the lower high and the lower lows registered below the 2 ½-year peak of 99.30 and second is the death cross created between the 50- and 200-day simple moving averages (SMA) after more than a year – if sustained.

In terms of momentum, the short-term bias is currently viewed as neutral-to-positive as the RSI is moving sideways above its 50 neutral mark and the MACD is above its signal line but barely in the positive territory.

Should the index fail to climb above the 200-day simple moving average (SMA), the spotlight will turn downwards and towards 96.85, which is the 61.8% Fibonacci of the 95.34-99.30 upleg. Breaking that support, the decline may next pause at 96.00, where any violation would add more confidence to the recent downtrend, probably confirming another lower low somewhere between 95.30 and 95.00.

Summarizing, the US dollar index is expected to behave neutral-to-positive in the short-term. Yet, with negative trend signals strengthening, the downtrend in the three-month window is likely to stay in place. 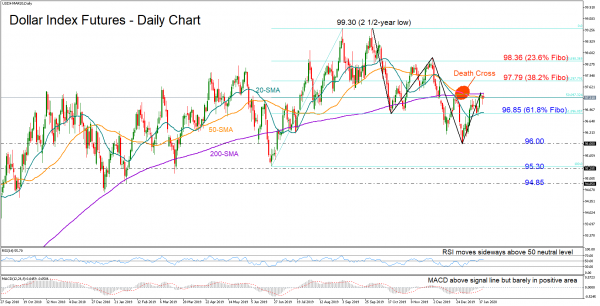