EURJPY is currently aggressively overtaking the mid-Bollinger band and the 118.96 resistance level, after having pivoted at the 118.46 support (an inside swing high from 27 September 2019), thus producing a four-month low.

Despite the prevailing one-month decline reflected in the downward sloping simple moving averages (SMAs) and by the tentative downtrend line, buyers’ efforts seem to be aided by the short-term oscillators, which are reflecting a pickup in positive sentiment. The MACD, in the negative region, has moved back above its red trigger line, while the rising RSI has claimed the 50 mark.

If sellers resurface and push below the mid-band, initial pressure could come at the lower band around 118.59 ahead of the fresh low of 118.46. Diving past the bottom, the 118.08 hurdle from October 2019 could impede the drop from reaching the 117.54 low.

Summarizing, the short-term bias has turned bearish below the 119.24 level and if the pair remains below the descending trendline and the 120.30 high, the negative picture could endure with a break below 118.46, reinforcing this outlook. 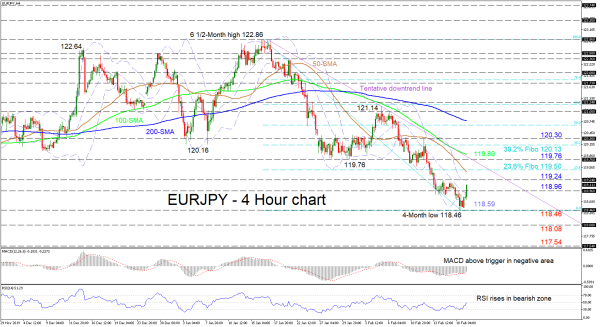