A rise in the number of new CoVid-19 cases outside of China saw US indices slide yesterday, despite data indicating the US economy is performing well.

The US30 index fell yesterday and looks to be extending those losses at this morning’s open. It could be a nervous session today.

The Philadelphia Fed manufacturing survey posted the highest reading in 30 years in February, while the leading index was the highest since 2017, suggesting the US economy is doing well. Today’s data includes flash PMI readings from Markit for February and existing home sales for January.

The index remains above the 55-day moving average at 13,379 while the 100-day average provides longer-term support below at 13,134

Germany’s flash PMI reading for February is expected to fall to 44.8 from 45.3 last month. That would be the weakest reading in three months. 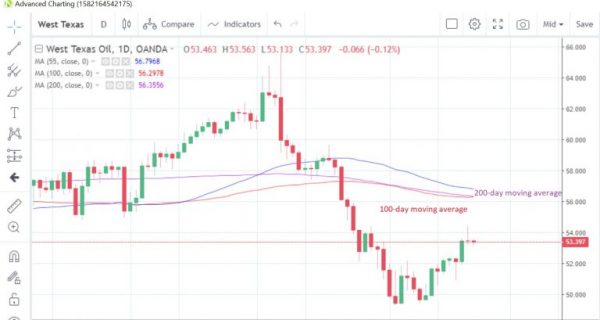 West Texas Intermediate (WTI) hit the highest since January 24 yesterday before retreating to finish flat on the day. Strong US data helped propel prices higher but a rise in the number of CoVid-19 cases outside China prompted the sell-off

Weekly crude oil inventories data from the Energy Information Authority showed a smaller-than-expected increase in stockpiles in the week to February 14. Just 400,000 barrels were added versus the 2.5 million analysts had expected.

US: Heavy Job Losses in March Only the Thin Edge of the Wedge of COVID-19 Impact

Plunge in US Employment in March with (Much) Worse Ahead