USDJPY opened on the bearish side on Thursday after failing to lift the 111.70 resistance in the previous session, with the price dropping back below the 111.00 number and into the Ichimoku cloud.

The spotlight is now turning to the ascending trendline as the RSI and the Stochastics are retreating in the bullish area. The trendline had successfully supported the market over the past few sessions and if it manages to hold once again, the pair could retry to clear the 111.70 barrier in order to reach the 10-month high of 112.21 registered in late-February. Higher, the 113.00 psychological level could next come in defence, rejecting any move towards the 113.70-114.00 resistance region.

In case the bears win the battle with the trendline, a sharper decline could follow towards the 108.00 mark if the 50- and 200-day simple moving averages (SMA) prove easy to get through. The 61.8% Fibonacci of the 112.21-101.17 downleg is also in the neighbourhood, adding extra importance to the region. Falling lower, the price could next take a breather around the 50% Fibonacci of 106.65 before heading for the 38.2% Fbonacci of 105.35.

Turning to the medium-term picture, the outlook remains neutral as long as the pair trades above 108.00.

Summarizing, USDJPY could face downside pressure in the short-term, though only a decisive close below the trendline could raise concerns. In the medium-term timeframe, the neutral outlook could deteriorate if the pair decelerates below 108.00. 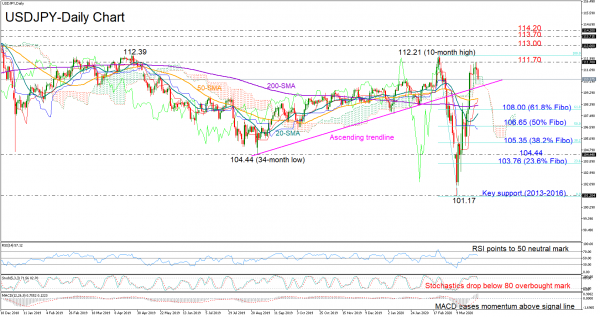