NZDUSD continues to consolidate within the Ichimoku cloud over the last couple of sessions, following the pullback from the eleven-year low of 0.5468. The pair remains above the bullish crossover within the 20- and 40-period simple moving averages (SMAs) in the 4-hour chart, confirming the recent upside tendency.

Technically, the RSI is pointing up in the positive region with weak momentum, while the MACD is moving sideways above the zero line.

In the positive scenario, where the price continues to expand above today’s high, a new top could be formed around the 0.5913 resistance, where the upper surface of the Ichimoku cloud holds. If the market manages to overcome that area, traders could look for resistance at the 50.0% Fibonacci of the down leg from 0.6445-0.5468 of 0.5957 and the 0.5980 barrier before steeper bullish actions take the price up to the 61.8% Fibonacci of 0.6070.

A reversal to the downside could stall at the moving averages around 0.5770. Further below, the 23.6% Fibonacci of 0.5700 could also provide support, and any violation at this point could potentially trigger a further sell-off towards the eleven-year low of 0.5468.

To sum up, the short-term bias is bullish, though the pair could be close to reversing lower again, with the medium-term outlook being negative. 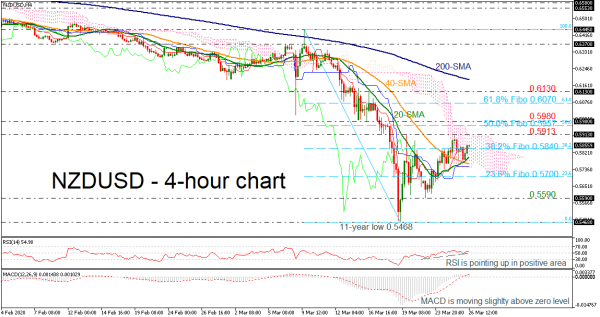