The EUR/USD pair settled at its highest since August 2015 at 1.1638, up for  a second consecutive week. The bullish breakout came on Thursday, following the ECB monetary policy meeting. President Draghi did his best to talk down the Euro, but the market did not believe him, grappled to the line in where he said that changes to the ongoing policies will be discussed next fall. Quantitative easing is set to remain in place until next December, but the market rushed to price in tapering. In the meantime, data released in the US these last days were soft, further backing the ongoing rally in the pair.

Next Wednesday, the US Federal Reserve will have its own monetary policy meeting, a “non-live” one, meaning that it won’t include fresh economic reviews or a press conference, which means that there are little chances the event could revert the negative sentiment towards the greenback, unless Yellen & Co. come with a huge, unexpected surprise. In the US, there’s just one more rate hike pending for this year, and latest data and political turmoil suggest that the Central Bank will have to pause afterwards. The imbalance between both central banks is shrinking.

From a technical point of view, the pair is clearly overbought and the risk of a downward corrective movement is high for this upcoming days. In the daily chart, however, there is no sign that that could happen, as technical indicators keep heading north, with the RSI at 74, whilst a bullish 20 DMA keeps leading the way higher, currently around 1.1450. In the 4 hours chart, technical indicators have lost upward strength, but are currently consolidating within overbought levels, whilst the price is also well above all of its moving averages. A downward correction towards 1.1460, will hardly the ongoing trend, although below that level, bulls will likely rush to take profits out of the table, fueling the decline. 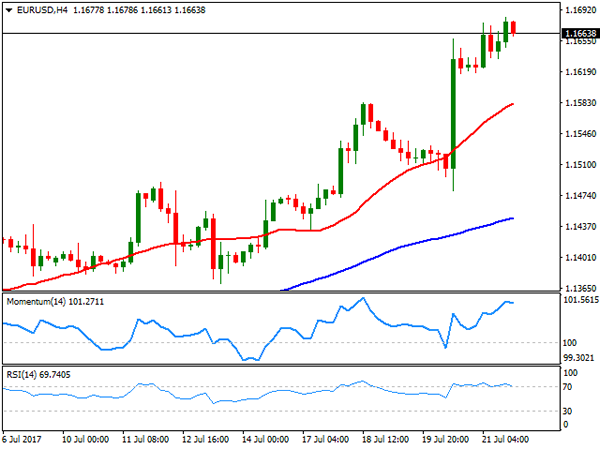