Dollar’s weakness kept gold on the run, with spot ending the week at $1,254.17 a troy ounce, a few cents below a three-week high of 1,255.64. Political jitters in the US alongside with soft local macroeconomic figures dented the case for a tighter monetary policy in the world’s largest economy, while rising speculation that the ECB will take a first step towards tapering next autumn further pressure the greenback. From a technical point of view, the daily chart shows that spot settled above a horizontal 100 DMA, for the first time in July, while technical indicators resumed their advances within positive territory, nearing now overbought readings with a strong upward momentum. In the 4 hours chart, the 20 SMA has extended its advance above the 200 SMA below the current level, while technical indicators have pared gains and turned modestly lower within overbought readings, maintaining the risk towards the upside. June 23rd daily high at 1258.79 is the immediate resistance and the level to break to confirm additional gains ahead, as the pair also has multiple daily lows from mid-May around the level. 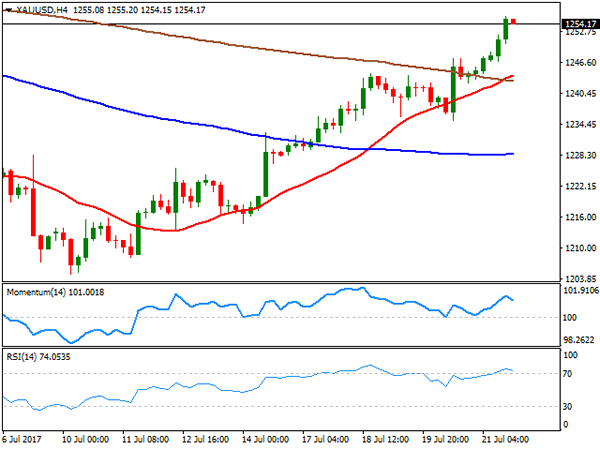