US indexes closed in the red on Friday, with the Dow Jones Industrial Average down 31 points, to 21,580.07, the Nasdaq Composite retreating 0.04%, to 6,387.75, and the S&P ending the day 0.04% lower at 2,472.54. Despite Friday’s declines, Wall Street ended near fresh all-time highs set earlier in the week, amid solid earnings reports for the second quarter of the year. The Dow, however, ended the week in the red, down roughly 0.30% with most members down on Friday, led by General Electric that lost 2.92% and Chevron that closed 1.32%. The best performer was Visa, up 1.52%, followed by Nike that added 1.44%. The daily chart for the index shows that it has been consolidating, with buying interest surging on approaches to its 20 DMA, currently at 21,500 and technical indicators easing within positive territory, these lasts limiting chances of a bullish move for this Monday. In the 4 hours chart, the scale leans towards the downside, as the Momentum indicator heads south within negative territory, while the RSI consolidates around 45. In this last time frame, the index is below its 20 SMA, but still above a bullish 100 SMA, also in the 12,500 region, with the level being now a critical support. 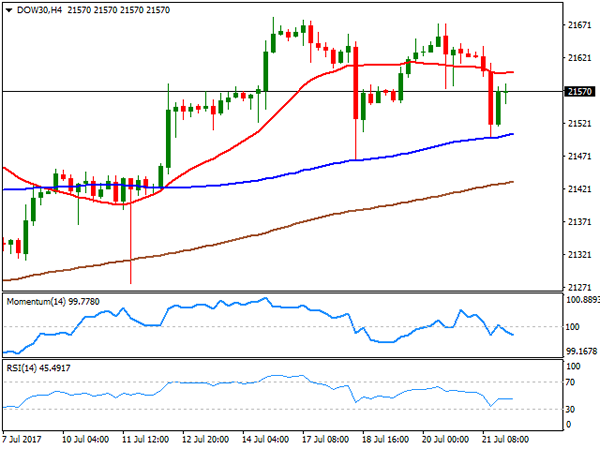