EURUSD has gained some momentum, flirting with the three-week high of 1.1000 in the previous sessions, before dropping slightly lower. The technical indicators appear weak, as the MACD is flattening near its trigger line in the positive area and the RSI keeps moving marginally below the overbought region.

The 20-period simple moving average (SMA) currently at 1.0925 could be a trigger point for steeper bearish action if the pair manages to break the red Tenkan-sen line. Lower, support could run towards the blue Kijun-sen line at 1.0893 and the 40-period SMA 1.0873. If the bears hold the control the 1.0850 barrier could attract attention ahead of the lower surface of the Ichimoku cloud at 1.0815, which stands near the bullish cross within the 20- and 40-period SMAs.

However, if the pair reverses back to the upside, investors could see the 1.1000 – 1.1018 resistance area. Even higher, resistance could next come somewhere near the 1.1145 mark, taken from the peak on March 27. If so, that would break the consolidation area between 1.0772 – 1.1000, which has been holding over the last month.

In the very short-term picture, the bounce off 1.0772 turned the outlook from neutral to positive, but for a bullish view in the bigger picture, prices need to overcome the 1.1000 handle. 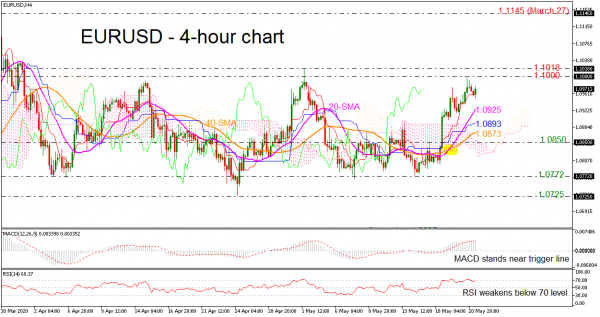