USDCAD has found some footing at the 100-day simple moving average (SMA) residing at the 1.3724 key trough, following a break of the foundation of a trading range that commenced around early April. The price has been weakening ever since it tested the ceiling of the horizontal market at 1.4264, backed by the intact negative Ichimoku lines. Promoting additional weakening in price is the declining 50-day SMA and the MACD, which is falling below its red signal line in the negative zone.

That said, the RSI, though flat in the bearish region, is starting to improve while in the oversold territory the %K line is nearing a bullish overlap of its red %D line, which may endorse advances. Traders also need to be aware of the predominant bullish tone of the 100- and 200-day SMAs assisting this view.

Summarizing, the short-term bearish picture may be at risk if the price remains above 1.3724, and a shift over 1.3850 may see a neutral-to-bullish bias return. 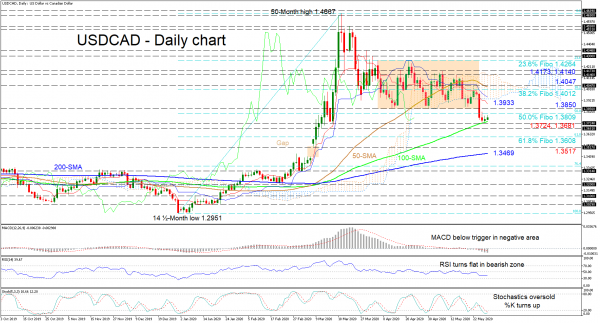 USDCHF Driven By Bears, Next Key Support Near 0.9320